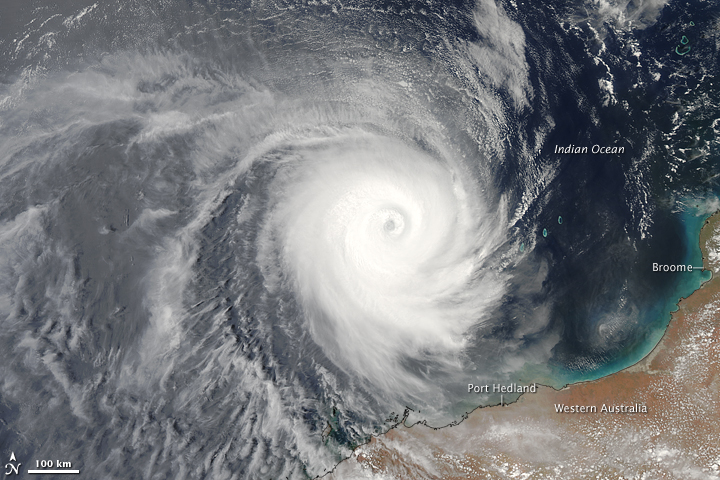 Tropical Cyclone Billy moved off the coast of Western Australia on December 25, 2008. The Moderate Resolution Imaging Spectroradiometer (MODIS) on NASA’s Aqua satellite took this picture at 3:10 p.m. local time on December 25. Compared to earlier images, the storm appears more compact in this picture, and occurs almost entirely over the ocean.

After canceling a tropical cyclone warning from Pardoo to Port Headland, the Australian Government Bureau of Meteorology issued a cyclone warning for Western Australia coastal communities near Pilbara on December 25, 2008. The bulletin warned of wind gusts up to 100 kilometers (60 miles) per hour, should the storm take a route more toward the southwest. The bulletin also forecast a high probability of a tropical cyclone in the region from December 26-28, 2008.

On December 28, 2008, the Australian Government Bureau of Meteorology downgraded the storm’s status to that of ex-tropical cyclone, stating that it posed no further threat to communities of Western Australia.