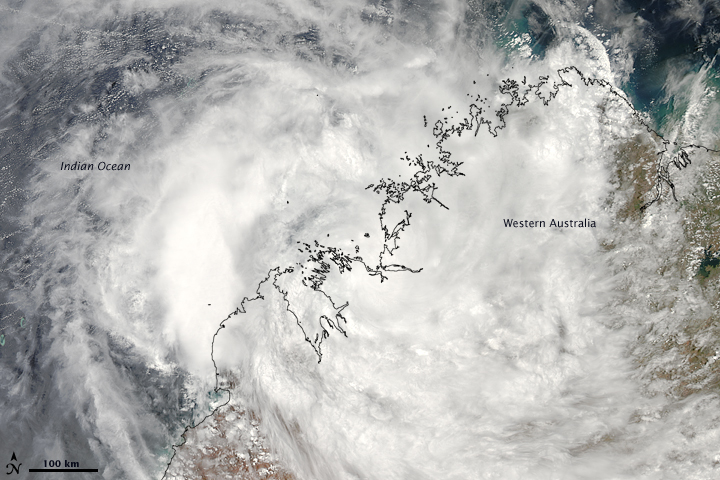 Tropical Cyclone Billy continued traveling along Western Australia’s Kimberley Coast on December 22 and 23, 2008. At 3:55 a.m. local time on December 23, the Australian Government Bureau of Meteorology issued a cyclone warning for coastal and island communities from Kuri Bay to Wallal and a cyclone watch for coastal areas from Wallal to Roebourne. At the time of the report, Billy was classified as a Category 1 storm, and was estimated to be 26 kilometers (16 miles) south-southwest of Cape Leveque and 165 kilometers (103 miles) north-northeast of Broome. The storm was expected to travel west-southwest at 13 kilometers (8 miles) per hour. Coastal communities were warned to prepare for heavy rain, localized flooding, and strong winds.

The Moderate Resolution Imaging Spectroradiometer (MODIS) on NASA’s Aqua satellite took this picture of Tropical Cyclone Billy at 2:40 p.m. local time on December 22, 2008. In this image, the storm stretches across several hundred kilometers of coastline, with intense clouds to the northwest, and clouds stretching inland far to the southeast. The high-resolution image shows clouds reaching as far as Australia’s Northern Territory.

On December 23, 2008, the Australian Government Bureau of Meteorology issued a forecast track map predicting that Billy would travel west-southwest over the next few days, moving off the Australian coast.

This image, from February 4, 2011, shows that ex-cyclone Yasi maintained its distinctive spiral shape after two days moving over Australia’s eastern coast and interior.