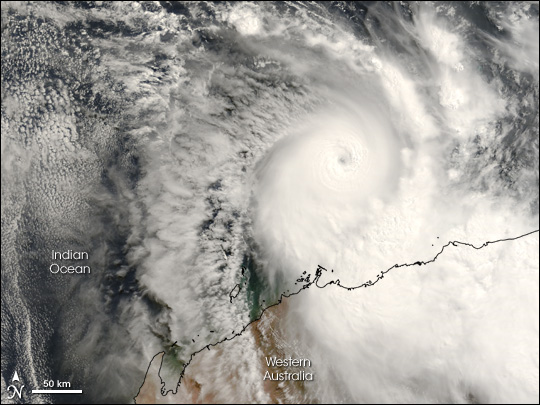 Tropical Cyclone Kara was poised just offshore of the Pilbara coast of Western Australia on March 27, 2007. Kara was not a particularly severe storm, but was prepared to hit the same area that powerful Cyclone George and Category 2 Cyclone Jacob hit two weeks earlier.

This photo-like image was acquired by the Moderate Resolution Imaging Spectroradiometer (MODIS) on the Terra satellite on March 27, 2007, at 10:25 a.m. local time (02:25 UTC). The storm was a tropical cyclone with a circular shape and distinct eye at its center. According to the University of Hawaii’s Tropical Storm Information Center, Cyclone Kara had sustained winds of 145 kilometers per hour (90 miles per hour) near the time this image was acquired.

You can download a 250-meter-resolution Cyclone Kara KMZ file for use with Google Earth.