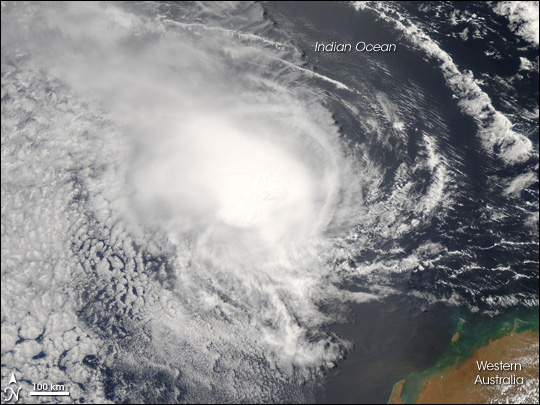 Tropical Cyclone Jacob was in the eastern Indian Ocean off the shore of Western Australia on March 10, 2007. This storm had been moving towards the Pilbara coast of northwestern Australia for several days, coming in from the northeast after forming south of Java several days earlier.

This photo-like image of Jacob was acquired by the Moderate Resolution Imaging Spectroradiometer (MODIS) on the Aqua satellite on March 10, 2007, at 2:10 p.m. local time (06:10 UTC). The storm was a moderate-strength tropical cyclone with an irregular shape and no obvious eyewall (ring of towering clouds) at its center. According to the University of Hawaii’s Tropical Storm Information Center, Cyclone Jacob has sustained winds of 140 kilometers per hour (90 miles per hour) around the time this image was acquired. Jacob was forecast to come ashore near Port Hedland, not far from where Cyclone George made landfall days earlier. Jacob was not expected to be nearly as powerful, but it will hinder efforts to recover from George.

You can also download a 250-meter-resolution Cyclone Jacob KMZ file for use with Google Earth.