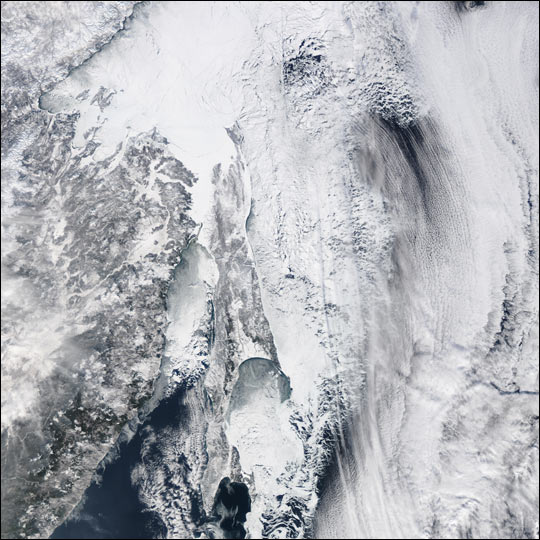 Though the Sea of Okhotsk off the eastern coast of Russia is almost entirely covered in ice during the winter months, it is one of the more productive marine environments in the world during the late spring and summer months. The above image of the sea in its frozen state was acquired on January 26, 2003, by the Moderate Resolution Imaging Spectroradiometer (MODIS) aboard NASA’s Terra spacecraft. The sea reaches a maximum depth of 12,850 feet (3,916 meters), and the surface temperature of the water plunges as low as 28.8 degrees Fahrenheit (~1.8 degrees Celsius) in the winter and goes as high as 55 degrees Fahrenheit (13 degrees Celsius) in the summer. During the summer, commercial fisheries originating from as far away as Poland ply these waters for walleye pollock, flounder, herring, Pacific salmon, halibut, Pacific sardine, Pacific saury, cod, capelin, sand eel, smelts, crab, and shrimp.

Eastern Russia borders the sea to the north and to the east. In the center of the sea sits Sakhalin Island, which appears as a charcoal shard off the Russian coastline. Though the island is now officially part of Russia, it has switched hands several times between Russia and Japan over the past two centuries. Recently, the island has become the center of environmental controversy as American oil companies, with the assistance of the Russian government, have begun tapping into rich oil reserves off the coast of the island.