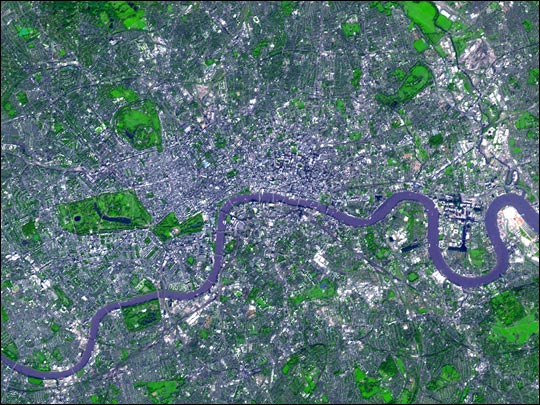 For almost 2,000 years, the River Thames has served as the life force of London, capital of the United Kingdom and one of the world’s most famous cities. In AD 43 the Romans established the trading settlement of Londinium at a favorable crossing point on the river. The Romans remained until the 5th century, when the city came under Saxon control. The early 17th century saw enormous growth, but the deadly plague of 1664 and 1665 ravaged the population, and in the following year the Great Fire, which burned for four days, destroyed most of the city. A public transportation system and other city services in the early 19th century eased many of the increasing urban problems of the burgeoning capital of the wealthy British empire. After coping with the devastating effects of bombing during World War II and the gradual dismantling of the empire, London today thrives as a vital modern metropolis. London is one of 100 cities being studied using Advanced Spaceborne Thermal Emission and Reflection Radiometer (ASTER) data to map and monitor urban use patterns and growth.

This image was acquired on October 12, 2001 by the Advanced Spaceborne Thermal Emission and Reflection Radiometer (ASTER) on NASA’s Terra satellite. With its 14 spectral bands from the visible to the thermal infrared wavelength region, and its high spatial resolution of 15 to 90 meters (about 50 to 300 feet), ASTER images Earth to map and monitor the changing surface of our planet.