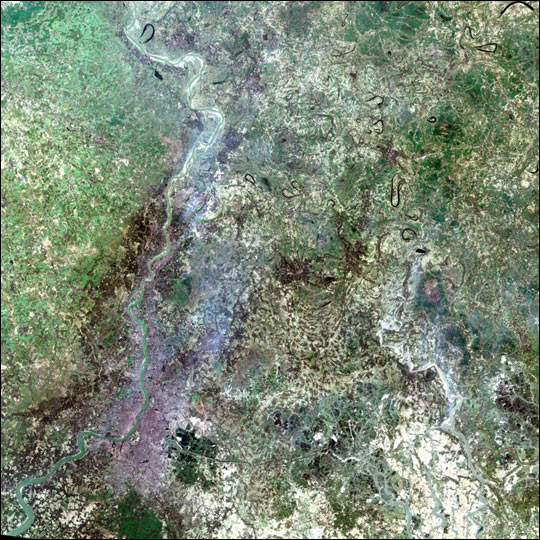 North of the Bay of Bengal in eastern India, the city of Calcutta (large purple area) hugs the eastern bank of one of the myriad channels that split off the Ganges River before it empties into the Bay. The arm of the Ganges that runs through Calcutta is known as the Hooghly River. It is the large, pale green river running through the left side of the image. Calcutta, also referred to as Kolkata, is about 100 miles north of where the Hooghly empties into the Bay via the Mouths of the Ganges.

The city’s location along the banks of the river so near the Bay makes it the most important port city in the country. However, it also makes it hot, swampy, and humid, and has confined urban growth to a narrow strip rarely more than a few miles on either side of the river. Swamps and marshlands surround the city, and in fact, much of the territory between Calcutta and the Bay of Bengal is semi-wilderness, including the Sunderbans Refuge—a World Heritage Site and refuge for the largest remaining population of the endangered Bengal Tiger. The area is forest fringed with mangrove swamps, and many parts can only be reached by boat. Such remoteness exists in sharp contrast to the Calcutta metro area. The largest city in India, and one of the ten largest in the world, Calcutta is home to more than 11 million people.

Calcutta is the world’s leading producer of a natural fiber called jute, which can be used in everything from clothing to carpet. The production factories are located along the river banks along with several power plants; it may be a combination of emissions from both these sources that is creating the slight haze visible from the north end of the city up to the top of the image. In the upper part of the image, numerous dark “squiggles” are in fact lakes, perhaps oxbow lakes, which are formed when a part of a stream or river is cut off from the main channel by sedimentation and changes in the direction of the current. That they are lakes, and not free-flowing bodies of water, is supported by their dark color, which in this false-color image suggests that they are calm and clear, rather than sediment-laden like the Hooghly River and the other branches of the Ganges that can be seen at lower right.

This Landsat 7 image was made from data acquired February 24, 2002.