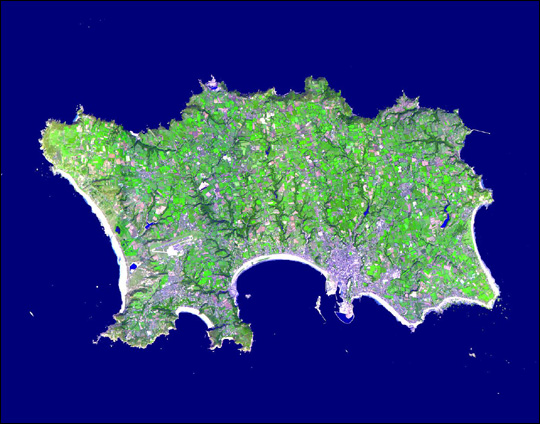 The Isle of Jersey (officially called the Bailiwick of Jersey) is the largest Channel Island, positioned in the Bay of Mont St. Michel off the northwest coast of France. The island has a population of about 90,000, and covers about 90 square kilometers. The economy is based largely on international financial services, agriculture, and tourism. Called Caesaria in Roman times, Jersey became part of the Duchy of Normandy in 912. When William the Conqueror invaded and took the throne of England in 1066, the fortunes of Jersey then became linked to those in England, although the island manages its internal affairs through its own parliament—the States of Jersey.

This image was acquired on September 23, 2000, by the Advanced Spaceborne Thermal Emission and Reflection Radiometer (ASTER) on NASA’s Terra satellite. With its 14 spectral bands from the visible to the thermal infrared wavelength region, and its high spatial resolution of 15 to 90 meters (about 50 to 300 feet), ASTER images Earth to map and monitor the changing surface of our planet.

ASTER is one of five Earth-observing instruments launched December 18, 1999, on NASA’s Terra satellite. The instrument was built by Japan’s Ministry of Economy, Trade and Industry. A joint U.S./Japan Science Team is responsible for validation and calibration of the instrument and the data products.