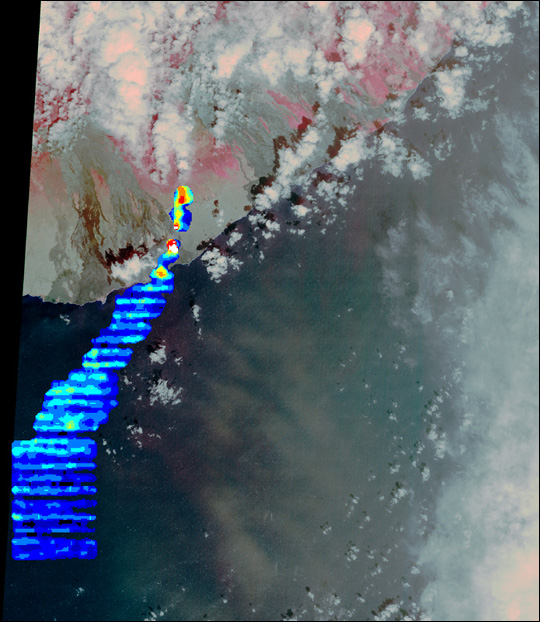 Kilauea Volcano, on the Island of Hawaii, has been in a constant state of eruption since January 3, 1983. The Pu'u O'o vent, formed soon after the onset of this eruption, is a persistent source of sulfur dioxide gas emissions. Changes in the rate of sulfur dioxide emission from a volcano can signal an impending eruption, and volcanologists attempt to measure emission rates with a variety of techniques. On the eve of the 20th anniversary of the eruption of Kilauea, we present a map of the Pu'u O'o sulfur dioxide plume derived from ASTER data. The map, produced from ASTER's thermal infrared channels, depicts color-coded concentrations superposed onto a false-color composite of ASTER's visible and near infrared channels. High sulfur dioxide concentrations are colored white, lower concentrations are red, orange, yellow, green and blue. ASTER is the only instrument in orbit that can detect passive venting of sulfur dioxide in plumes as small as the Pu'u O'o plume (typically less than 1.5 km wide over land). This capability is essential if we are to monitor sulfur dioxide emissions from space.

This image was acquired on October 30, 2001, by the Advanced Spaceborne Thermal Emission and Reflection Radiometer (ASTER) on NASA's Terra satellite. With its 14 spectral bands from the visible to the thermal infrared wavelength region, and its high spatial resolution of 15 to 90 meters (about 50 to 300 feet), ASTER images Earth to map and monitor the changing surface of our planet.

ASTER is one of five Earth-observing instruments launched December 18, 1999, on NASA's Terra satellite. The instrument was built by Japan's Ministry of Economy, Trade and Industry. A joint U.S./Japan science team is responsible for validation and calibration of the instrument and the data products.