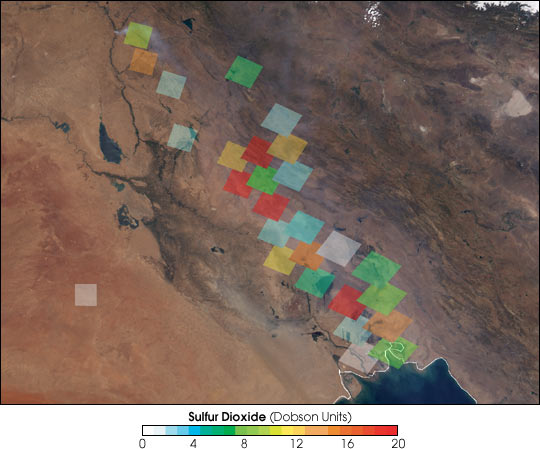 A fire burning at a sulfur plant in Qayyarah, northern Iraq since June 25, 2003, has produced a huge plume of sulfur dioxide gas over Iraq and other Middle Eastern countries. According to local media reports, the persistent plume has caused severe environmental and health impacts, such as crop damage and respiratory distress.

The area covered by the sulfur dioxide concentrations has been large enough to detect with the Total Ozone Mapping Spectrometer (TOMS) instrument, which usually can only detect large amounts of sulfur dioxide emitted by volcanic eruptions. TOMS has also detected sulfate aerosol, produced by oxidation of sulfur dioxide, in the smoke plume emanating from the fire.