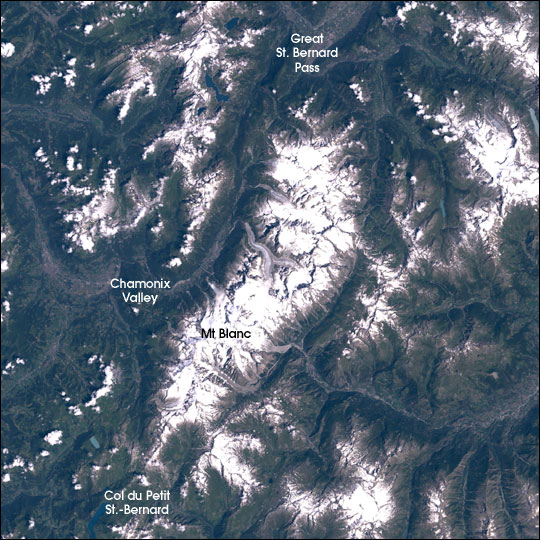 Mount Blanc is the highest mountain in Western Europe. The eastern boundary of Europe is debated as there is no clear division between Europe and Asia as landmasses. Some definitions of the eastern boundary place the Caucasus Mountains of Russia in Asia, in which case Mt. Blanc is Europe’s tallest mountain and hence one of the Seven Summits (the tallest peaks on each of the seven continents). Its 4,807-meter-high (15,707-foot) peak lies in the ridgeline of the Pennine Alps and the peak defines the border between France and Italy. Its name means “White Mountain” in French, though in earlier centuries, it was also known as Mont Maudit, or the “Accursed Mountain.” Sixteenth Century legend has it that a temple and statue of the Celtic sky god was once located on one of the high passes near the mountain, and Christian myths tell of St. Bernard’s eventual domination of this “pagan devil,” from which the older name comes. The names of the nearby Great St. Bernard Pass (between Italy and Switzerland) and Col de Petit St. Bernard come from this historical figure as well. In addition to these two passes, there is a tunnel under the mountain offering a less challenging drive through the Alps.

In 1760, Horace Benedict de Saussure offered a money prize to the first to successfully climb to Mt. Blanc’s peak. On August 8, 1786, Jacques Balmat and Michel Gabriel Paccard, both locals, laid claim to the prize by reaching the top. Their climb had included a harrowing overnight forced encampment on the glacier, which disproved local legend that such a feat was not possible. Two-day ascents are now quite common, and climbers are a common sight in the summer months.

This year’s Tour de France passes to the west of Mt. Blanc in Stages 7 & 8 (July 12 & 13, 2003), the first mountain stages of the race. The steep grades and extended climbs from valley floors will provide some of the most challenging terrain in the race. Among the cyclists, those whose strengths play to climbing stages will be making their first exciting attempts to break from the pack and establish strong leads to solidify in climbing stages through the Pyrenees stages later in the Tour.

The mountain massif, of which Mt. Blanc is a part, is an upwelling of igneous rock from an ancient sea bed. The massif was forced upward by the northward motion (relative to the Eurasian plate) of the African plate over the past 100 million years. The region is old enough to have been deeply cut in areas by riverine and glacial erosion, in places exposing the base rock of the original protocontinent, which is around 400 million years old. The high permanent snowpack of the mountains feeds glaciers which carve characteristic U-shaped valleys throughout the area. There is over 100 square kilometers (40 square miles) of glaciers in the region feeding into the Chamonix valley on the French side.

This image was acquired by Landsat 7’s Enhanced Thematic Mapper plus (ETM+) sensor on July 30, 2001. This is a true-color image made using red, green, and blue wavelengths (TM bands 3, 2, and 1).