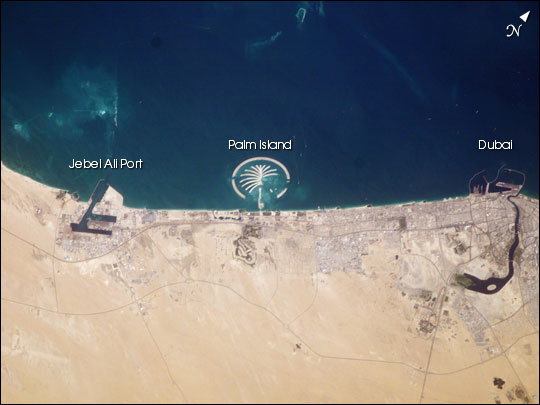 Sometimes, what looks like a palm tree from orbit is, well, a palm tree. Palm Island Resort, just 1 mile off the coast from Dubai, is scheduled to be complete by 2006. Advertised as “being visible from the Moon” this man-made structure will have 17 huge fronds surrounded by a crescent-shaped breakwater. This island is being built from 80 million cubic meters (2.8 billion cubic feet) of land dredged from the approach channel to the Emirate’s Jebel Ali port, which is being deepened to 17 meters (56 feet). Sediments in the water from dredging activity can be seen near the port.

Palm Island is one of several massive projects in Dubai aimed at diversifying the economic base by expanding the tourist industry. The government of Dubai predicts that tourism, mostly from Europe, will quadruple to 15 million visitors annually by 2010. When completed the resort will have approximately 1200 single-family residences each with private beachfront, 600 multi-family residences, an aquatic theme park, shopping centers, cinemas, and more. A twin island is planned to be built nearby.

Astronaut photograph ISS006-E-35516 was taken with an Electronic Still Camera on March 5, 2003 with a 180-mm lens and is provided by the Earth Sciences and Image Analysis Laboratory at Johnson Space Center. The detailed view above is shown at half actual spatial resolution. Additional images taken by astronauts and cosmonauts can be viewed at the NASA-JSC Gateway to Astronaut Photography of Earth.

The Islands were constructed on reclaimed land off of Dubai’s Persian Gulf coast.