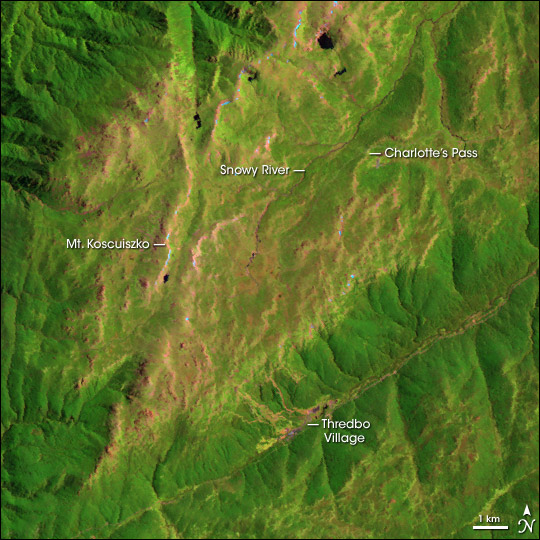 The 2,228-meter-tall (7,310-foot) Mt. Kosciuszko lies at the southern end of Australia’s Snowy Mountains, which define the Kosciuszko National Park. Though it is the tallest mountain on the continent, Kosciuszko is very easy to climb. In summer, it is a scramble up the slope from the Thredbo Village (or you can take the chairlift!) to the plateau, and a gentle 6-km (4-mile) walk to the mountain. The sensitive alpine grasses are protected from the foot traffic by a steel grate, making the walk all the less challenging (though highly discouraged by the Park Service when thunderstorms are threatening!). The gratework ends at a car passable road (though no traffic is permitted past Charlotte’s Pass) on which it is another 10-minute stroll to the peak. In summer, it is a pleasant and cool hike of an hour or two, while in winter the elevated plains are covered in deep snow, but still quite passable on skis or snowshoes. Hardly Everest! In fact, “peak baggers” have suggested that the Seven Summits should instead include New Zealand’s Mt. Cook or Indonesia’s Puncak Jaya (also known as Carstenz Pyramid). However, Oceania is not a continent, so Kosciuszko is the true highest peak on the Australian continent.

The mountain’s name (known as “Kozzy” to Australians) comes from the fertile imagination of the first European explorer to reach the Snowy Mountains, Paul Strzlecki. On arriving in the Snowy Mountains in 1840, he thought the mountain’s gentle slopes were suggestive of the tomb of the Polish general, Thaddeus Kosciuszko, who assisted the Americans in the 1770s in their war against the British, and in the 1790s with the Polish again Russia. However, for many decades the mountain’s name was mispelled “Kosciusko” by Australians and was only corrected in the 1990s during trade negotiations with Poland. Aboriginal Australians had been visiting the Snowy Mountains and neighboring Bogong High Plains during the summer months for thousands of years prior to Strzlecki’s visit in hunt of the nutritious Bogong moths.

Mt. Kosciuszko is part of the Great Dividing Range, a long chain of mountains running along the Australian east coast which seperate the arid inland from the more fertile and densely-populated coastal regions. The Snowy Mountains are the centerpiece of a huge engineering program, in which a series of dams and tunnels were constructed during the 1950s to draw on the reliable water supply from snowmelt into the inland regions for irrigation. By bringing water falling on the eastern side of the Snowys into the drainage basin on the west, Australia opened up huge areas to agriculture that had been previously too arid to farm. But even after the water diversion scheme was completed, the region remained sparsely populated and the Great Divide still seperates much of the population from the interior of the continent. The range itself is ancient and, indeed, may be one of the oldest mountain ranges in the world. Its relatively low altitude and gentle slopes reflect hundreds of millions of years of erosion.

The land to the immediate north and east of Kosciuszko seen in the image above is moderately flat, elevated land with reliable annual snowpack in winter from which the Snowy River receives much of its flow. Unlike most Australian rivers, water flows through the Snowy all year long rather than drying up in summer. In winter, Thredbo becomes a popular ski resort—some of the ski runs are visible here as pink areas where trees are cleared from the runs down the slope back towards the village. In the high-resolution image which shows more of the region around the National Park, the reservoirs of the Snowy Mountain Scheme are quite evident. The north-south trending greenery is the Kosciuszko National Park which extends for a hundred kilometers or so north of the mountain, as well as the neighboring Begong High Plains to the south. The large arc-shaped lake is the Hume Reservior on the Murray River.

This image was acquired by Landsat 5’s Thematic Mapper (TM) sensor on February 8, 1991. This is a false-color image made using infrared, near-infrared, and red wavelengths (TM bands 5, 4, and 3). In this scheme, bare land without vegetation is pink, green areas show healthy vegetation and forests, and water appears dark blue.

[Editor’s Note: This is one in an ongoing series of Landsat scenes of the Seven Summits. Previous peaks include Asia’s Mt. Everest, North America’s Denali/Mt. McKinley, South America’s Cerro Aconcagua, and Africa’s Kilimanjaro.]