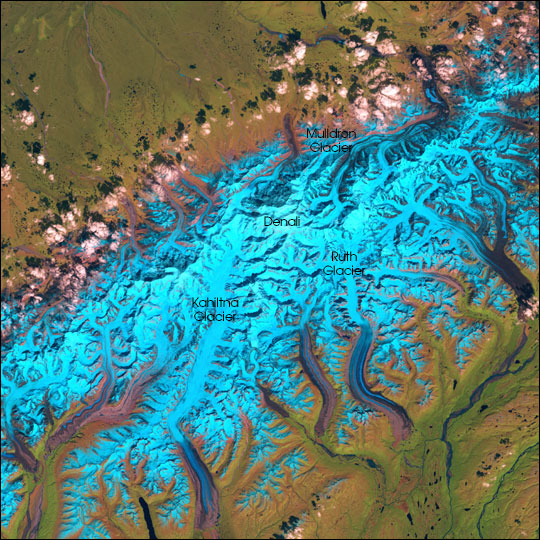 The 6,194-meter-tall (20,320-foot) Mt. McKinley is a towering double-peaked mountain in the middle of the Alaska Range, made all the more impressive for rising thousands of feet above its neighbors. As the tallest mountain in North America, it is one of the world’s Seven Summits (the tallest mountains on each of the seven continents). The plains immediately to its north, at an elevation of 600 m (2,000 feet), give Mt. McKinley more vertical relief than any of the other Seven Summits. Named after the United States senator and president, William McKinley, the area around the mountain was designated the McKinley Wilderness Area in 1917. However, the peak is known as Denali, or “the high one,” in the local Athabascan language. When the area was expanded and converted to a national park in 1980, the area was renamed the Denali National Park and Preserve. There remains discussion of renaming the peak itself as most mountaineers refer to it as Denali.

In 1910, William Taylor and Pete Anderson climbed to the north peak of Denali, reaching it via the Muldrow Glacier. Three years later, Archdeacon Hudson Stuck, Robert Tatum, Walter Harper, and Harry Karstens reached the summit of the taller south peak. Between 1913 and 1950, there were very few ascents of Denali. However, in 1951, Bradford Washburn pioneered a new route over the West Buttress, using a plane with skis to access the Kahiltna glacier. This less technically challenging approach has since become the most popular route to the mountain.

The Alaskan Range is a 1,000-km (600-mile) arc of mountains that have been actively forming for the past 65 million years. They are shaped by the Denali Fault where two tectonic plates rub against each other. The mountain formation continues out into the Bering Sea where the Aleutian Island chain is being formed by active volcanoes. The Alaskan Range separates the state’s interior plateau from the coastal plains of southern Alaska.

Several glaciers can been seen in this scene. Where they are covered with undisturbed snow, they appear bright blue in this false-color image; but where the fresh snowfall has melted away or been shifted by the motion of the glaciers, the ice streams then become a mix of older, dirty snow, ice, and rocky debris. Carried downslope by the flow of the glaciers, these ice streams appear as streaks running parallel to each other until they reach the glacier’s terminus, where some of the ice becomes meltwater and drains out into rivers and streams.

This image was acquired by Landsat 5’s Thematic Mapper (TM) sensor on June 15, 1986. This is a false-color image made using infrared, near-infrared, and green wavelengths (TM bands 5, 4, and 2). In this scheme, bare land without vegetation is pink, green areas show healthy vegetation, clouds are white, snow and ice is light blue while water is dark blue.

[Editor’s note: This is the one image in the Earth Observatory Seven Summit series. Previous peaks include Asia’s Mt. Everest and Africa’s Kilimanjaro. ]