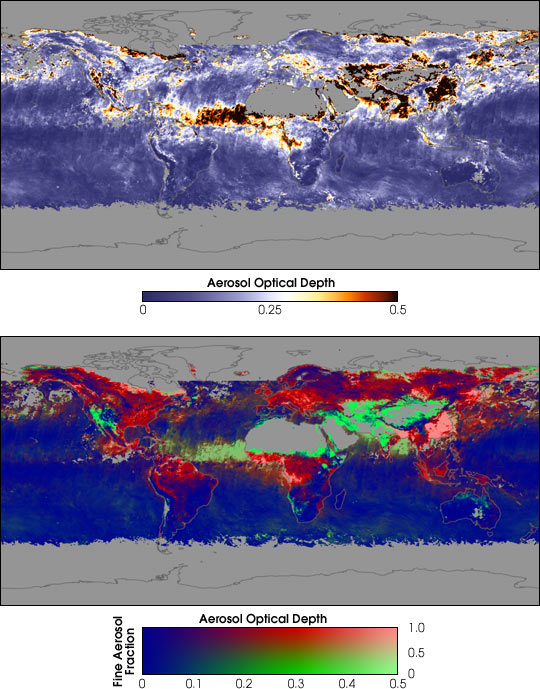 Flying aboard NASA's Terra and Aqua satellites, the Moderate Resolution Imaging Spectroradiometer (MODIS) sensors measure aerosols over almost the entire globe every day. (Aerosols are tiny solid or liquid particles suspended in the atmosphere.) The top image shows a global map of aerosol optical depth, which is a measure of how much sunlight is prevented from traveling through a column of atmosphere. Basically, the image shows the locations of aerosol plumes—the darker brown the pattern, the denser the plume of particles and the less sunlight reaches the surface, while more sunlight is absorbed within the atmosphere or reflected back to space. Grey areas show where no data were collected, such as over the poles during periods of darkness, in cloudy areas, and over very bright land surfaces where MODIS does not make aerosol measurements.

By measuring precisely how much light is reflected at visible and near-infrared wavelengths, the MODIS sensors can also distinguish between aerosol plumes of large particles (more than 1 micrometer) and small particles (less than 1 micrometer). This new information, along with other data, helps scientists determine which plumes are human produced and which occur naturally. In the bottom global map, the green patterns show plumes of large aerosol particles, the red patterns show plumes of small particles, and the light brownish colors show where large and small particles are intermingling. Again, grey areas show where no data were collected.

Click to read the press release, entitled NASA Scientists Use Satellites to Distinguish Human Pollution from Other Atmospheric Particles. Year-long animations that show the movements of these aerosol plumes around the globe are also available with the press release.