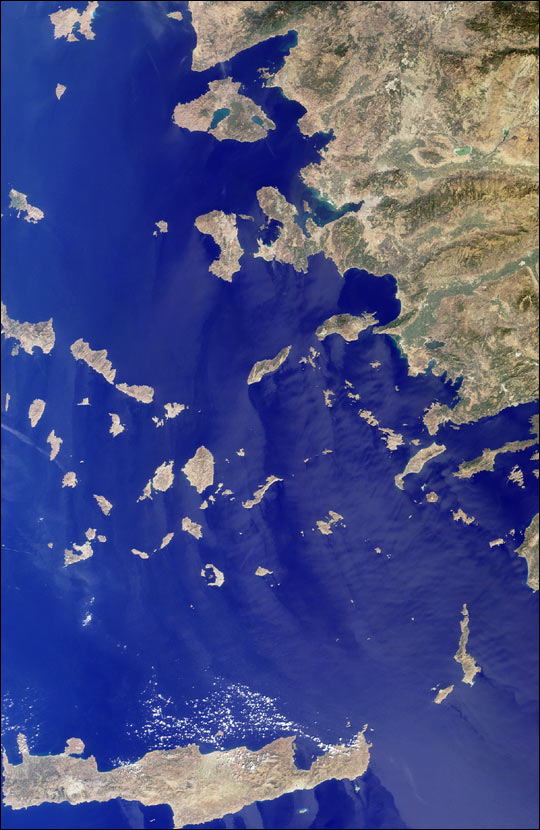 The Greek islands of the Aegean Sea, scattered across 800 kilometers from north to south and between Greece and western Turkey, are uniquely situated at the intersection of Europe, Asia and Africa. This image from the Multi-angle Imaging SpectroRadiometer (MISR) includes many of the islands of the East Aegean, Sporades, Cyclades, Dodecanese and Crete, as well as part of mainland Turkey. Many sites important to ancient and modern history can be found here. The largest modern city in the Aegean coast is Izmir, situated about one quarter of the image length from the top, southeast of the large three-pronged island of Lesvos. Izmir can be located as a bright coastal area near the greenish waters of the Izmir Bay, about one quarter of the image length from the top, southeast of Lesvos. The coastal areas around this cosmopolitan Turkish city were a center of Ionian culture from the 11th century BC, and at the top of the image (north of Lesvos), once stood the ancient city of Troy.

The image was acquired before the onset of the winter rains, on September 30, 2001, but dense vegetation is never very abundant in the arid Mediterranean climate. The sharpness and clarity of the view also indicate dry, clear air. Some vegetative changes can be detected between the western or southern islands such as Crete (the large island along the bottom of the image) and those closer to the Turkish coast which appear comparatively green. Volcanic activities are evident by the form of the islands of Santorini. This small group of islands shaped like a broken ring are situated to the right and below image center. Santorini’s Thera volcano erupted around 1640 BC, and the rim of the caldera collapsed, forming the shape of the islands as they exist today.

The Multi-angle Imaging SpectroRadiometer observes the daylit Earth continuously from the north to the south pole, and views almost the entire globe every 9 days. The data are collected in swaths during the daylit period of each orbit. The MISR Browse Image Viewer provides access to low-resolution true-color versions of these images. This natural-color image was acquired by MISR’s nadir (vertical-viewing) camera. The image covers an area of 369 kilometers x 567 kilometers.

View a browse image of the entire swath from which this image was extracted.