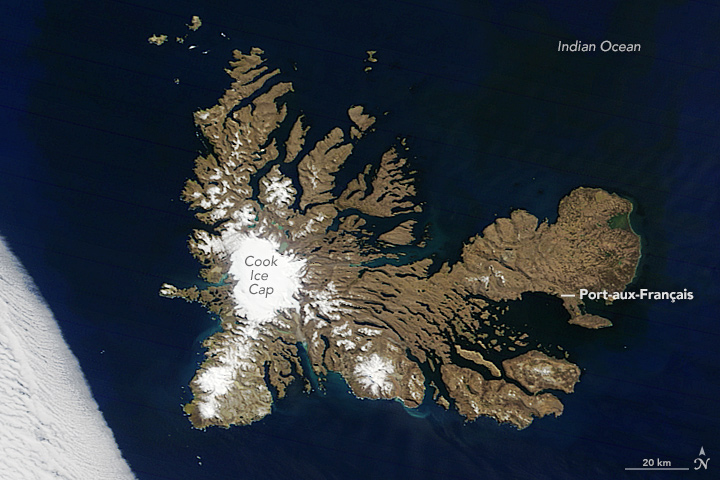 The Kerguelen Islands are an overseas territory of France. But their far-off location in the southern Indian Ocean places these islands far closer to Antarctica than to mainland Europe. In fact, the islands are so remote and the landscape so harsh that they have also been called the “Desolation Islands.”

On October 28, 2016, the Moderate Resolution Imaging Spectroradiometer (MODIS) instrument on NASA’s Terra satellite captured this natural-color image of the Kerguelen Islands. Grande Terre (French for “large land”) is the most sizeable in the island group. Its steep fjords and peninsulas are ringed by hundreds of smaller islands, which bring the archipelago’s total land area to 7215 square kilometers (2,786 square miles).

Penguin and seal populations are among the wildlife that thrive on Grande Terre. But because of its remoteness—and the severely cold, windy weather—you won’t find many people. Most residents of the island are scientists based in the settlement of Port-aux-Français, where they study everything from geology and biology to weather and climate.

One area of research involves the myriad bodies of ice. Researchers have shown that between 1963 and 2001, ice-covered areas of the Kerguelen Islands shrank by 21 percent—a phenomenon that’s in-line with what’s happening in Patagonia, South Georgia, and other sub-polar latitudes. Over the same span, the Cook Ice Cap (center) shrank from 501 to 403 square kilometers. And the losses have continued: Subsequent research published in Nature noted that glacier wastage on the islands during the 2000s was “among the most dramatic on Earth.” The main reason was less precipitation and drier air.

But that just scratches the surface of the region’s interesting features. The islands are actually some of highest points on a huge underwater plateau. Given the right nutrients and physical conditions, spectacular blooms of phytoplankton can make an appearance in the waters over the plateau.