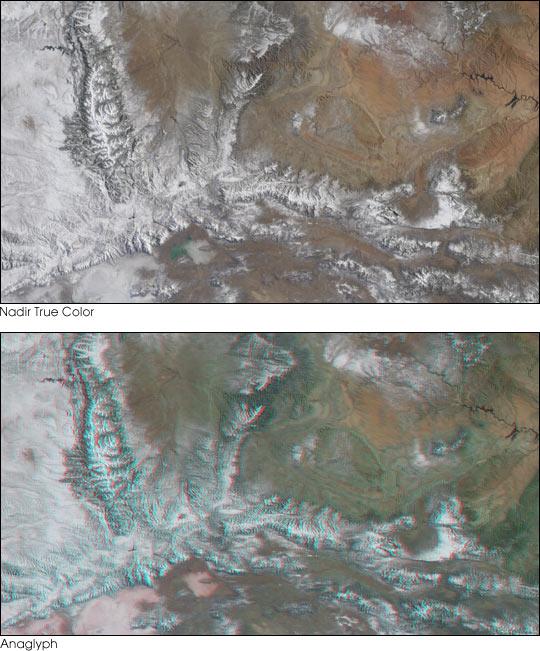 The peaks of the Wasatch and Uinta Ranges provide spectacular backdrops for the 2002 Winter Olympics, to be held in Salt Lake City, Utah. The mountains surrounding Salt Lake City are renowned for the dry, powdery snow that results from the arid climate and location at the western edge of the Rocky Mountains and eastern rim of the Great Basin.

This early-winter image pair was acquired by the Multi-angle Imaging SpectroRadiometer (MISR) on December 31, 2000. The top image is a natural-color view from MISR’s nadir (downward-looking) camera, and the bottom image is a stereo anaglyph created using red-band data from MISR’s 46-degree forward-looking camera, and green and blue-band data from the nadir camera. In order to facilitate stereo viewing, the images have been oriented with north at the left and west at the bottom. To observe the 3-D effect of the stereo anaglyph, red/blue glasses should be used with the red filter placed over your left eye. Information on ordering glasses can be found at http://photojournal.jpl.nasa.gov/Help/VendorList.html#Glasses.

The canyons and peaks of the Uinta and Wasatch Mountains are particularly striking in the stereo view. The Uinta Mountains contain the highest peaks in Utah and are notable as the most prominent east-west trending range in the contiguous United States. The upper left corner of the image contains a portion of Wyoming, and part of the Colorado River can be seen near the right-hand edge. Each image represents an area of approximately 270 kilometers x 475 kilometers.

Front Range of the Rockies