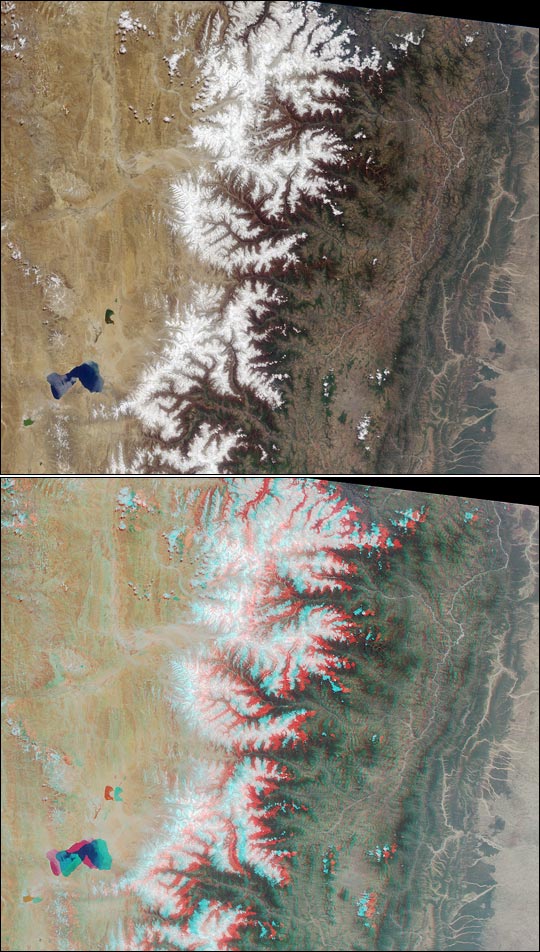 The Tibetan Plateau and a portion of the Himalayan Mountain chain are captured in this Multi-angle Imaging Spectroradiometer (MISR) true-color and stereo images from May 14, 2000. The upper image is composed of red, green, and blue data from MISR's vertical (nadir) camera. The lower image is a composite of data from the instrument's vertical and 46-degree forward cameras. Both are oriented with north at the left. Viewing the image in 3-D requires the use of red/blue glasses with the red filter placed over your left eye.

On the left side of these images is the Tibetan Plateau, the highest plateau on Earth and often called the "Roof of the World." Near the lower left is lake Paiku Co, at an altitudeof 4591 meters. The border between Tibet and Nepal marks the eastern extent of the magnificent Himalayan Mountains, home to many of the world's highest peaks. Himalaya is a Sanskrit word meaning "the Abode of Snow." Mt. Everest (8848 meters) and Mt. Makalu (8481 meters) are visible near the top center of the image.

Further to the south is the Mahabharat Range, separated from the Himalayas by the "River of Gold," the Sun Kosi. Rounding out our tour from north to south, on the righthand side of the image, is the densely populated Indo-Gangetic Plain of northern India.