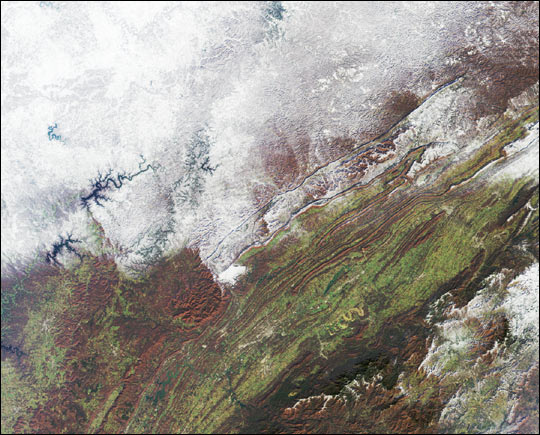 The snowstorm which swept across the eastern United States on December 4 and 5 also brought the season’s first snow to parts of the south and southern Appalachia. The extent of snow cover over central Kentucky, eastern Tennessee, western North Carolina and Virginia are apparent in this view from the Multi-angle Imaging SpectroRadiometer (MISR). This natural-color image was captured by MISR’s downward-looking (nadir) camera on December 7, 2002.

The Appalachians are bounded by the Blue Ridge mountain belt along the east and the Appalachian Plateau along the west. Valleys and ridges between the higher elevation areas retain the green and reddish-brown hues of autumn, and many rivers and lakes appear blue and unfrozen. The highest peak in the eastern United States, Mount Mitchell, is found in North Carolina’s western tip, near the Great Smoky Mountains (the dark-colored range at lower right).

The Multi-angle Imaging SpectroRadiometer observes the daylit Earth continuously and every 9 days views the entire globe between 82 degrees north and 82 degrees south latitude. The MISR Browse Image Viewer provides access to low-resolution true-color versions of these images. This data product was generated from a portion of the imagery acquired during Terra orbit 15805. The image covers an area of 347 kilometers x 279 kilometers, and utilizes data from blocks 60 to 62 within World Reference System-2 path 19.

The season's first snowfall blankets portions of the East and South with icy precipitation and up to 10 inches snow.