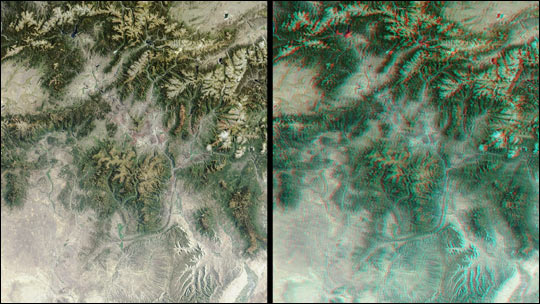 The mountains and desert plateaus of northwest Colorado are contrasted here in two views from the Multi-angle Imaging SpectroRadiometer (MISR). On the left, a natural-color view acquired by MISR's vertical-viewing (nadir) camera illustrates these features at a pixel resolution of 275 meters. A striking example of the capability of multiple view angles to illustrate topography is provided by the 3D stereo anaglyph view on the right, which was created by combining data from MISR's 46-degree forward-viewing and nadir cameras. To facilitate stereo viewing, both images have been oriented with north toward the left. Viewing the stereo image in 3D requires the use of red/blue glasses ( http://photojournal.jpl.nasa.gov/Help/VendorList.html#Glasses) with the red filter placed over your left eye.

Undoubtedly the dominant feature of central Colorado are the Rocky Mountains. Running roughly north-south within the eastern portion of the image (across the top in this orientation) mountain ranges pictured here include the Medicine Bow, Front, Gore and the Sawatch. The Colorado River originates in the Rocky Mountains National Park near Lake Granby -- a dark blue lake in the upper edge of the image toward the right of center. Other water bodies shown include Antero Reservoir in the top right corner. The highest peak in the U.S. Rocky Mountains, Mount Elbert, is situated west of Antero about halfway between the Turquoise and Twin Lakes.

The Colorado River traverses the length of the image, running roughly east and south to the lower right-hand corner, where it meets the Gunnison River at the city of Grand Junction. The striking "L" shaped feature in the lower image center is a sandstone monocline known as the Grand Hogback. The Yampa River runs from its headwaters in the highlands about 65 kilometers north of Steamboat Springs to Dinosaur National Monument in the lower left corner. Steamboat Springs is the site of the Third International Workshop on Multiangular Measurements and Models ( http://cires.colorado.edu/iwmmm-3/) through June 12, 2002.