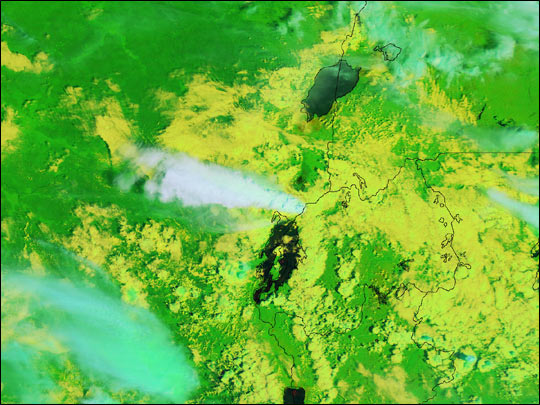 Mount Nyiragongo, located in the Democratic Republic of the Congo, erupted today (January 17, 2002), ejecting a large cloud of smoke and ash high into the sky and spewing lava down three sides of the volcano. Mount Nyiragongo is located roughly 10 km (6 miles) north of the town of Goma, near the Congo’s border with Rwanda. According to news reports, one river of lava is headed straight toward Goma, where international aid teams are evacuating residents. Already, the lava flows have burned through large swaths of the surrounding jungle and have destroyed dozens of homes.

This false-color image was acquired today (January 17) by the Moderate-resolution Imaging Spectroradiometer (MODIS) roughly 5 hours after the eruption began. Notice Mount Nyiragongo’s large plume (bright white) can be seen streaming westward in this scene. The plume appears to be higher than the immediately adjacent clouds and so it is colder in temperature, making it easy for MODIS to distinguish the volcanic plume from the clouds by using image bands sensitive to thermal radiation.

Images of the eruption using other band combinations are located on the MODIS Rapid Response System.

Nyiragongo eruptions are extremely hazardous because the lava tends to be very fluid and travels down the slopes of the volcano quickly. Eruptions can be large and spectacular, and flows can reach up to 10s of kilometers from the volcano very quickly. Also, biomass burned from Nyriagongo, and nearby Mount Nyamuragira, eruptions tends to create clouds of smoke that adversely affect the Mountain Gorillas living in the adjacent mountain chain.

This true-color image shows a blue-gray plume blowing away from the bare-rock summit of Nyiragongo Volcano and toward the west-southwest on June 27, 2009.