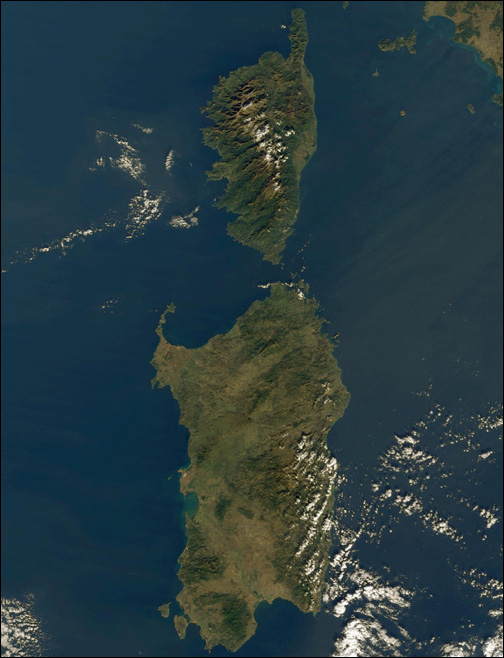 Rich in antiquities and picturesque landscapes, the island provinces of Corsica, France, (top) and Sardinia, Italy, (bottom) have captured the imaginations of historians and poets alike for centuries.

In this scene, Corsica is the smaller island to the north. The island has almost 1,700 hills and mountains, ranging from 300 to over 2,700 meters in height. The tallest of these peaks is the snow-capped Monte Cinto toward the northern end of the island. Coursing throughout the island is an extensive network of rivers, carved into Corsica's granite face by snowmelt and rainwater runoff.

The Corsican Cape sits on the island's northern finger; its eastern slope is somewhat hilly. There are quite a few agricultural fields and vineyards visible as the light green swath to the south all along the eastern shore. Along the southern shore are the dazzling cliffs of Bonifacio. Moving up the west coast in the state of Ajaccio we see a jagged, chiseled water front, reminiscent of the famous fjords of Norway. There are four large gulfs and many smaller rocky inlets sculpted into Corsica's west coast. Moving soutward, they are the Gulfs of Porto, Sagone, Ajaccio, and Valinco.

The larger island to the south--across the Strait of Bonifacio--is Sardinia, Italy, one the earliest populated lands of Europe. Some ancient artifacts date human populations there as old as 6000 B.C. Around 1500 B.C., another group of settlers arrived on the island (historians don't know where they came from) and spread quickly across the island. Known as the Nuragic people, these settlers built almost 30,000 circular fortresses--called "nuraghe"-- around the island; each strategically located so that they were within eyesight of their nearest neighbors. Today, about 7,000 nuraghe ruins still stand, unlike any other ruins in the world.

Sardinia is the second largest island in the Mediterranean, situated due west of mainland Italy. Stretching across the central, eastern part of Sardinia is the rugged terrain of Gennargentu--mountainous and thickly vegetated. Mostly uninhabited by people, the 50,000-hectare wilderness of Monte Arcosu is home to a unique population of fallow deer as well as wild boar, hares, foxes, golden eagles, and the Sardinian wildcat.

Founded in the ninth century by Phoenicians, the port city of Cagliari sits on the large bay on Sardinia's southeastern coast. To the north lies the old city of Sassari (originally an ancient settlement called Tathari), situated on a hillside overlooking the large Gulf of Asinara.

This true-color image was acquired by the Moderate-resolution Imaging Spectroradiometer (MODIS), flying aboard NASA's Terra satellite, on December 7, 2001.