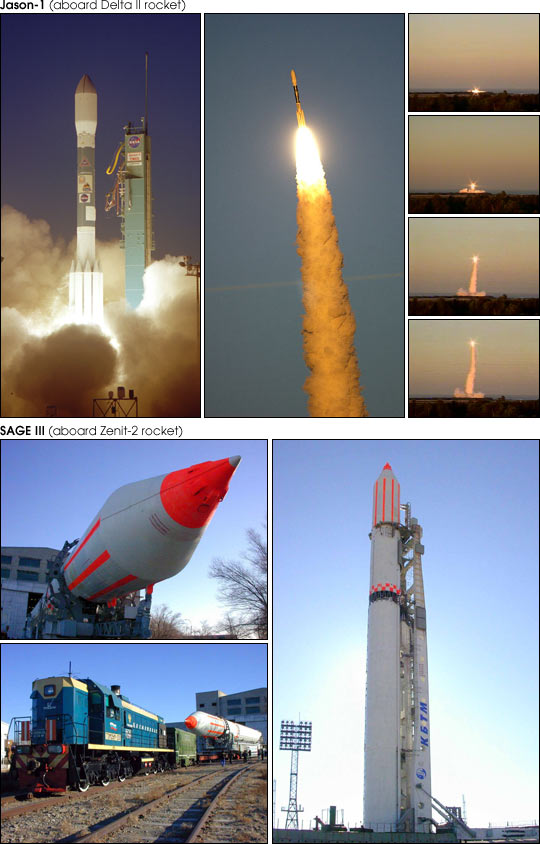 Jason 1 will join its orbiting cousin, the venerable Topex/Poseidon satellite, to continue observations of the global climate interaction occurring between the sea and the atmosphere as a result of stored solar energy. Instruments on the satellite will map variations in ocean surface topography to monitor world ocean circulation, study interactions of the oceans and atmosphere, improve climate predictions and observe events like El Niño. The mission is expected to last three years.

SAGE III
A new NASA remote-sensing satellite instrument took its first steps toward monitoring the health of the Earth’s upper atmosphere yesterday, December 10, 2001. The Stratospheric Aerosol and Gas Experiment III (SAGE III) was launched successfully from the Baikonur Cosmodrome in Kazahkstan. (The lower series of photographs show the launch preparations for the Zenit-2 rocket that carried SAGE III into orbit)

Developed and managed by NASA Langley Research Center, Hampton, Va., SAGE III aboard the Russian Meteor-3M spacecraft lifted off at 12:36 p.m. EST on a Ukraine-built Zenit-2 Rocket. SAGE III will make precise measurements of ozone, aerosols, water vapor and other gases so researchers can better understand how and why the climate and ozone are changing. Scheduled for a three-year mission, the SAGE III/Meteor-3M is a joint partnership between NASA and the Russian Aviation and Space Agency (RASA).

After so many years of working on the SAGE III project, today has been a very exciting day for me, Langley and the entire SAGE III team,” said Dr. William Chu, SAGE III project scientist. “So many people have worked very hard and should feel proud of this great accomplishment.”

The SAGE III instrument uses a simple technique to provide complex information on the stratosphere—its electronic “eye” watches sunsets, sunrises, moonsets and moonrises. Called occultation, the light from the sun and moon passes through the Earth’s edge or atmospheric limb which SAGE III measures.

“SAGE III locks on to the sun or moon and, as the spacecraft goes behind the Earth, the instrument measures the dimming of that sunlight or moonlight caused by the Earth’s atmosphere. By making these measurements in the correct color region, SAGE III produces accurate profiles of ozone or water vapor,” said Dr. M. Patrick McCormick, SAGE III principal investigator and co-director for the Center of Atmospheric Sciences at Hampton University. “SAGE III’s role is to provide long-term measurements of key components of the Earth's atmosphere vital for improved understanding of climate, climate change, and human-induced ozone chemistry and trends.”