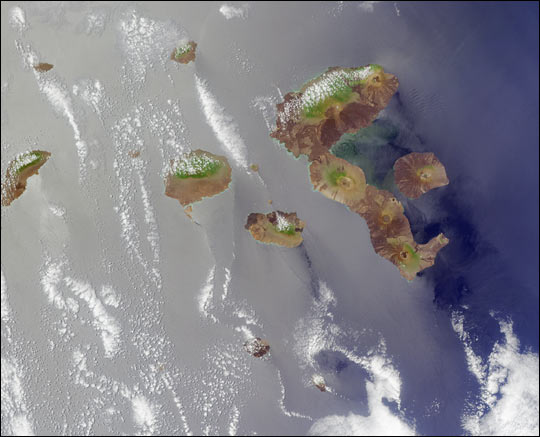 NOTE: To make identification of this scene more difficult, the image has been rotated such that north is not necessarily at the top.

Below are nine statements about the islands highlighted in this image. Use any reference materials you like, and mark each statement true or false:

1. There are no endemic species of cactus on any of the islands.

2. Flamingos, whose diets include crustaceans, tiny fish, and algae, can be found wading in brackish lagoons.

3. A change in ocean temperature associated with an episodic disruption in atmospheric circulation led to a precipitous decline in the local penguin population.

4. Discovery of the islands is generally attributed to a 16th century Spanish missionary whose vessel veered off its intended course.

6. Several plant species are endangered due to decimation by goats and competition with non-native vegetation.

7. Within the archipelago there are at least half a dozen freshwater lakes with diameters exceeding 250 meters.

8. A particular endangered animal sub-species is survived by a single male, and attempts at breeding have so far proved unsuccessful.

9. Chapter 13 of a book written in the mid-nineteenth century by a native of Shrewsbury, England is primarily concerned with the islands of this archipelago.

E-mail your answers, name (initials are acceptable if you prefer), and your hometown by Tuesday, December 18, 2001 to suggestions@mail-misr.jpl.nasa.gov.

A new "Where on Earth...?" mystery appears as the MISR "image of the week" approximately once per month. A new image of the week is released every Wednesday at noon Pacific time on the MISR home page http://www-misr.jpl.nasa.gov. The image also appears on the Atmospheric Sciences Data Center home page, http://eosweb.larc.nasa.gov/, though usually with a several-hour delay.