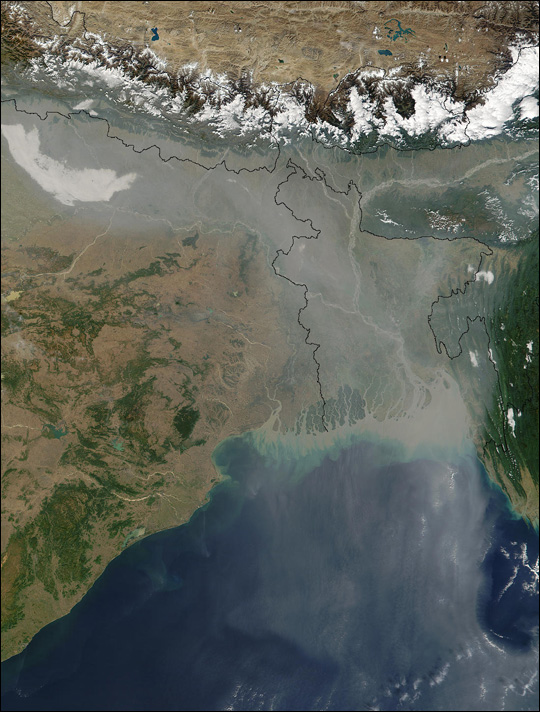 The skies over Northern India are filled with a thick soup of aerosol particles all along the southern edge of the Himalayan Mountains, and streaming southward over Bangladesh and the Bay of Bengal. Notice that the air over the Tibetan Plateau to the north of the Himalayas is very clear, whereas the view of the land surface south of the mountains is obstructed by the brownish haze. Most of this air pollution comes from human activities. The aerosol over this region is notoriously rich in sulfates, nitrates, organic and black carbon, and fly ash. These particles not only represent a health hazard to those people living in the region, but scientists have also recently found that they can have a significant impact on the region's hydrological cycle and climate (click to read the relevant NASA press release).

This true-color image was acquired on December 4, 2001, by the Moderate-resolution Imaging Spectroradiometer (MODIS), flying aboard NASA’s Terra satellite. It is interesting to compare the image above with this earlier MODIS image over the region, acquired on October 23, 2001. Notice the difference in the clarity of the air over the region in the earlier image.

Under the thick plume of aerosol, the Brahmaputra (upper right) and Ganges Rivers are still visible. The many mouths of the Ganges have turned the northern waters of the Bay of Bengal a murky brown as they empty their sediment-laden waters into the bay. Toward the upper lefthand corner of the image, there appears to be a fresh swath of snow on the ground just south of the Himalayas.

There is a thick haze of aerosol pollution over Northern India, which has persisted for weeks.

More haze hugged the Himalaya Mountains on January 21, 2007, clouding the skies over northern India, Nepal, and Bangladesh. In the south, thick sediment clogged the mouth of the Ganges.

Haze and Smog over India