Haze and Smog over India 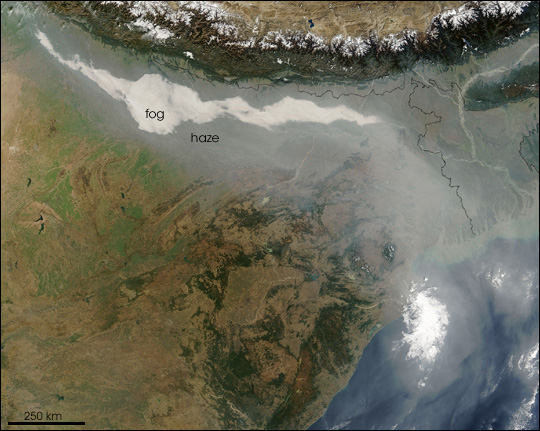 Fog stretched over northern India on December 17, 2004, and mixed with a river of haze that flowed west and south across Bangladesh and over the Bay of Bengal. According to news reports from the area, over the weekend of December 18 and 19, the foggy, smoggy conditions caused numerous deadly accidents in the Indian states of Bihar, Haryana, and Uttar Pradesh. All forms of transportation were delayed throughout the weekend, including air, train, and road traffic.

In this image from the Moderate Resolution Imaging Spectroradiometer (MODIS) on NASA’s Terra satellite, India occupies most of the center and left part of the scene, while Bangladesh is located in the upper right quadrant. Haze mingles with the fog at the foothills of the Himalaya Mountains, which arc across the top edge of the image. To the north is a small section of the Tibetan Plateau.

The brightness of the fog is muted by the overlying air pollution. In the lower right corner of the image, the haze stretches out over the Mouths of the Ganges River and onward to the Bay of Bengal. A cloud over the bay appears to be higher in the atmosphere than the haze; its brightness does not appear to be dimmed by the haze’s gray-brown pallor.