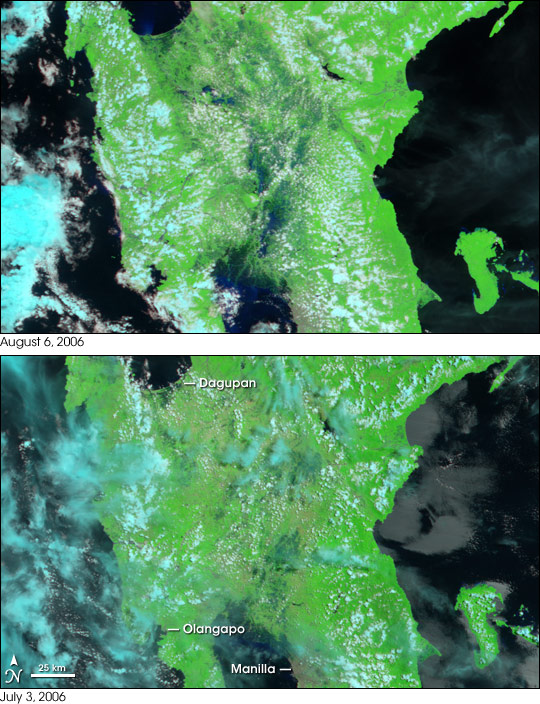 In mid-July, a combination of monsoon rains and downpours associated with a string of typhoons and tropical storms left the Philippine Island Luzon soggy. Floods affected the low-lying center of the island from Manila to Dagupan. On the west coast, Olongapo was flooded as well. According to reports collected by the Dartmouth Flood Observatory, floods and landslides associated with Tropical Storm Bilis killed at least 28 people and displaced more than 50,000 in mid-July. Roads, bridges, and crops were damaged. Since that time, Typhoon Kaemi, Tropical Depression Henry, and Typhoon Prapiroon have all contributed to the ongoing flooding.

The region was still awash in standing water, most likely from Typhoon Prapiroon, which swept over the region on August 2, when the Moderate Resolution Imaging Spectroradiometer (MODIS) on NASA’s Terra satellite passed overhead on August 6, 2006. Compared to an image captured on July 3, much more of the island’s mid-section was flooded, with deep blue pools of standing water spread across the region. In this type of false-color satellite image, plant-covered land is bright green, bare or sparsely vegetated land is tan, clouds are light blue or white, and water is dark blue. The high-resolution image provided above has a spatial resolution (level of detail) of 250 meters per pixel.