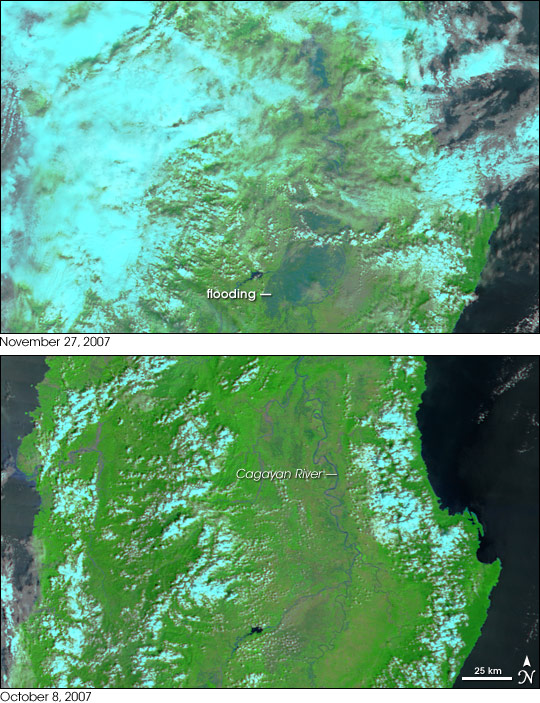 A small break in the clouds provides a glimpse at flooding in the Cagayan River valley on the Philippine island of Luzon in the top image. The Moderate Resolution Imaging Spectroradiometer (MODIS) flying on NASA’s Terra satellite captured the image on November 27, 2007, two days after Typhoon Mitag swept over the island. The storm came ashore with winds of 150 kilometers per hour (90 miles per hour or 80 knots), according to the Joint Typhoon Warning Center, and dropped heavy rain over the island. The rain caused floods and landslides that killed 19 people in Luzon, reported Reuters on November 28.

As the top image shows, Mitag’s rains pushed the Cagayan River over its banks. Terra MODIS captured the lower image on October 8, 2007, when conditions were normal. The contrast between the two images reveals extensive flooding along the river, particularly in the wetland area near the lower edge of the images. The images were made with a combination of infrared and visible light to make water stand out against the ground. In this type of image, water is black, the color of the Philippine Sea around the island. However, mud chokes the water of the Cagayan River, particularly in its flooded state, turning it blue. The clouds overhead are light blue and white, while plant-covered land is bright green. Bare earth is tan.