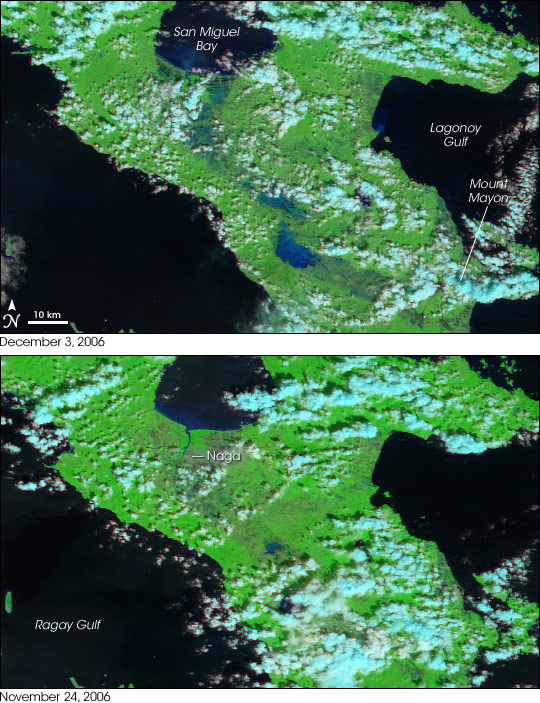 The fourth typhoon to hit Luzon Island in the Philippines in two months, Typhoon Durian left a broad swath of flooded land in its wake after it blew across the southern tip of the island on November 30, 2006. The floods paint a blue swath across the center of the island in the top image, collected by the Moderate Resolution Imaging Spectroradiometer (MODIS) on NASA’s Terra satellite on December 3, 2006. The image was created with both infrared and visible light so that water is black, sediment-laden water is blue, clouds are turquoise, and plant-covered land is bright green. The city of Naga near San Miguel Bay is grey.

The lower image shows the southeast section of Luzon on November 24, a few days before Typhoon Durian came ashore. The image shows that most of the visible flooding occurred along the Bicol River, which has its headwaters on the Mayon Volcano and drains into San Miguel Bay. A comparison between the December 3 and November 24 images also reveals spots of flooding along the eastern shore of the island around Lagonoy Gulf.

The Associated Press reported that 450 people had been confirmed dead as of December 4, with 507 injured and 599 missing in the aftermath of the storm. Most of the deaths occurred in floods and mudslides near Mayon Volcano, a region that was still under clouds on December 3.

You can download a 250-meter-resolution KMZ file for use with Google Earth.