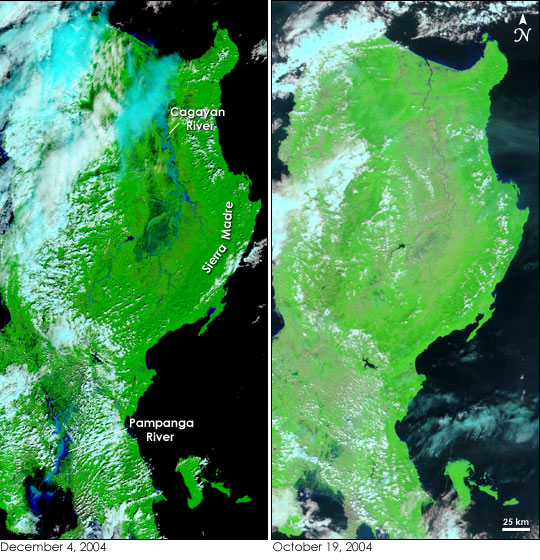 Four tropical storms in two weeks have saturated Luzon Island, the main island in the Philippines, causing devastating flooding. The Moderate Resolution Imaging Spectroradiometer (MODIS) on NASA’s Terra satellite captured this image of the island after the clouds from the most recent storm, Typhoon Nanmadol, cleared on December 4, 2004. Rivers throughout the island are swollen far beyond their normal size, as shown in the comparison image acquired on October 19. The most dramatic flooding is along the Cagayan River in the north and the Pampanga River in the south, but other rivers are also swollen. Further evidence of flooding is in the color of the water. In this false color treatment, water is typically dark blue or black. In the flood image, the water is light blue—a sign that it is tinted with sediment. A light blue plume in Manila Bay is also sediment. As flood waters gush over the land, they carry mud into the rivers and the surrounding ocean. The sediment is more obvious in the true color version of the image, where Manila Bay appears to be filled with mud.

Over 1,000 people are dead or missing as a result of flooding and landslides in the past week, according to media reports. The most severely impacted communities are in the Sierra Madre, where landslides buried whole communities.

After four tropical storms in two weeks, Luzon is reeling under severe floods. This TRMM image shows rainfall accumulated over the past two weeks.