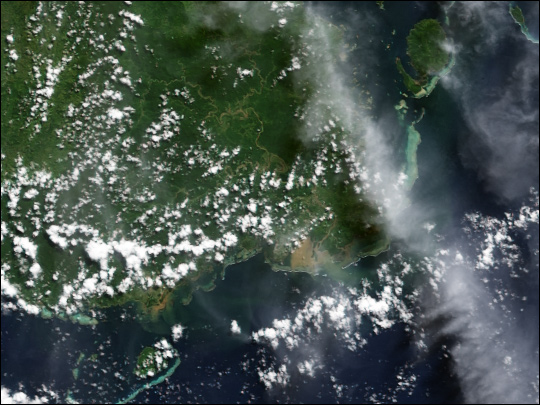 Mud-colored sediment colors the bay near Suva, Fiji’s capital city. Seperated from the ocean by the thin white line formed by a coral reef in this image, the brown water in the bay is the most obvious sign of the flooding and landslides that claimed the lives of at least 10 people in the past week. An intense storm on April 8, 2004, triggered the deadly landslides and flooding. A second storm moved through on April 15, bringing additional flooding. Water and mud closed the roads leading into Suva, cutting the city off from other towns on Viti Levu, Fiji’s main island. By the time the Moderate Resolution Imaging Spectroradiometer (MODIS) on the Terra satellite captured this image on April 17, 2004, the swollen rivers were tainted with tan sediment from the muddy flood waters that were draining off the island. The floods drove thousands from their homes. As of April 18, at least 20,000 people remained in evacuation shelters.

Both this and the high-resolution image provided above have a resolution of 250 meters per pixel. The large image shows both of Fiji’s main islands, Viti Levu, the largest island, and Vanau Levu to its north. 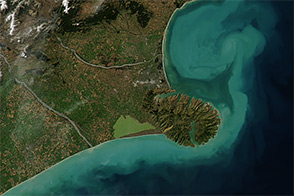 In March, muddy floodwaters coursed through rivers in the Canterbury Plains after a powerful storm passed over South Island.

Floods and Landslides in New Zealand