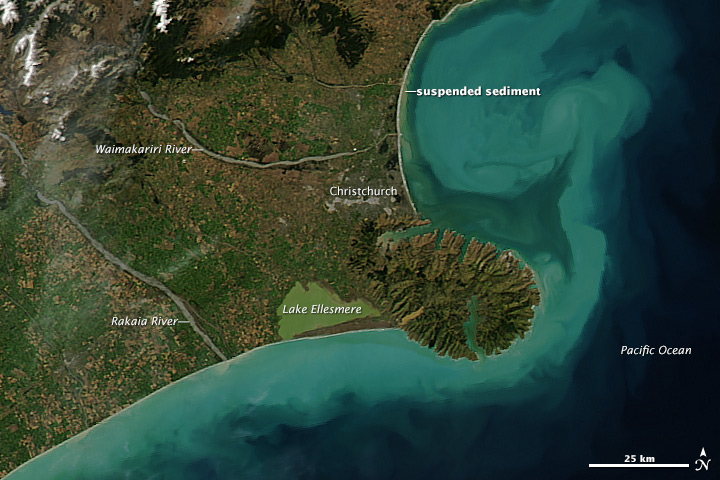 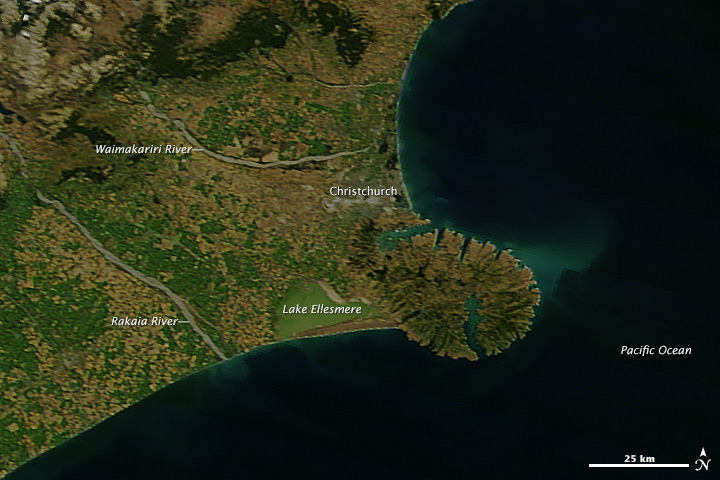 A powerful storm passed over New Zealand’s South Island in March 2014 and brought gale-force winds, torrential rains, and flooding to the city of Christchurch. A total of 74 millimeters (3 inches) of rain fell on March 4-5, according to MetService, New Zealand’s national meteorological service. More than 100 homes flooded and more than 4,000 lost power around the country’s third most populous city.

The surge of rainfall caused rivers—including the Waimakariri, Rakaia, Heathcote, and Avon—to swell with what appeared to be sediment-rich water. Skies had cleared enough by March 6, 2014, for the Moderate Resolution Imaging Spectroradiometer (MODIS) on NASA’s Aqua satellite to acquire this image showing the aftermath. While it’s not possible to make out patches of standing water in Christchurch, the large amount of suspended sediment flowing out from the rivers made dark blue coastal waters appear tan. The aquamarine patterns farther offshore are likely caused by suspended marine-based calcite sediment that was lofted up from the sea bottom by waves produced during the storm. The lower image, acquired by MODIS on February 22, 2014, shows the same area before the storm.

“When it comes to identifying a sediment resuspension event, the only way to be positive about the causes of the various colors in a satellite image like this is to have someone sample the water, but to go from dark to aquamarine over a few days over a large area with a strong storm passing in between is almost as good as being there with filters in hand,” noted Goddard Space Flight Center oceanographer Norman Kuring in an email.

Christchuch is located within a flood plain, occupying part of the large alluvial fan of the Waimakariri, the braided-river just north of the city. Like other braided rivers, the course of the Waimakariri is dynamic. In the past, it has shifted as far south as Lake Ellesmere, but levees now constrain the Waimakariri along the northern edge of the fan.

Christchurch’s flood control infrastructure has been under increasing pressure in recent years because a series of earthquakes struck the area in 2010 and 2011. According to University of Canterbury researchers, the quakes caused land in some areas to drop, while narrowing and uplifting certain river channels. The result is an increased risk of flooding.

In March, muddy floodwaters coursed through rivers in the Canterbury Plains after a powerful storm passed over South Island.

Terra gives a broad view of the scale of the devastating flooding.