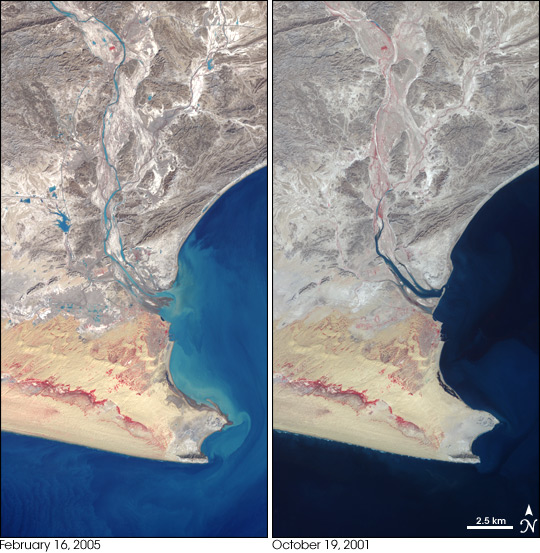 A pair of images of the Pasni area from February 16, 2005, and October 19, 2001, reveals some of the effects of recent, devastating flooding in southern Pakistan along the coast of the Arabian Sea. In these images, water appears dark blue (nearly black in places) to light blue, depending on the how much sediment is in the water. Vegetation is red, and the desert appears in shades of light brown and brownish yellow. The city of Pasni is located at the tip of the peninsula.

The most noticeable change is the huge plume of sediment off the coast of Pasni coloring the waters bright blue. The main channel of the river is carrying much more water on February 16, and the water is also thick with sediment. Differences in vegetation (red areas) in the flood plain of the river (visible in the 2001 image, but not the 2005 image) could be due to seasonal differences or to flooding.

A series of small reservoirs and new or improved roads can be seen in the 2005 image to the west of the river in the center of the image. There is also some standing water remaining in the agricultural areas to the south of the reservoirs. A road that can be seen running east west in the 2001 image through these lowlands appears to have disappeared after the floods. The mouth of the river has also been reshaped by the huge volume of water and sediment that recently passed through it in the flooding.

For more information on flooding in this region, visit the Dartmouth Flood Observatory.

Heavy rains continue to flood parts of coastal Pakistan through the first week of March 2005. The Dasht and Koja Rivers along the Iran-Pakistan border continue to run high in this MODIS image.