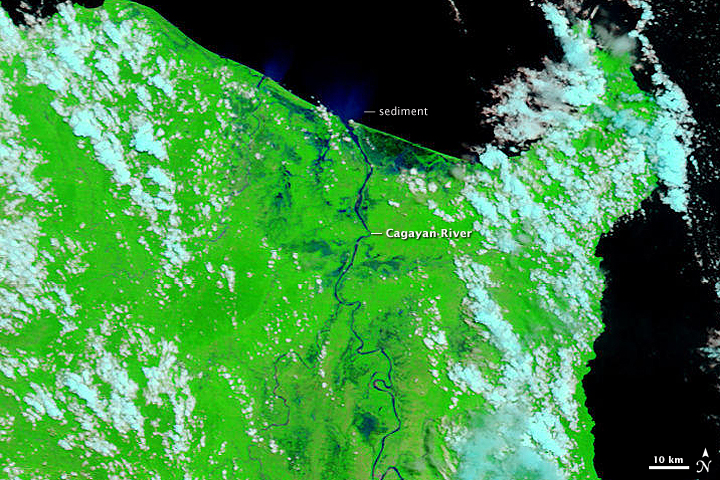 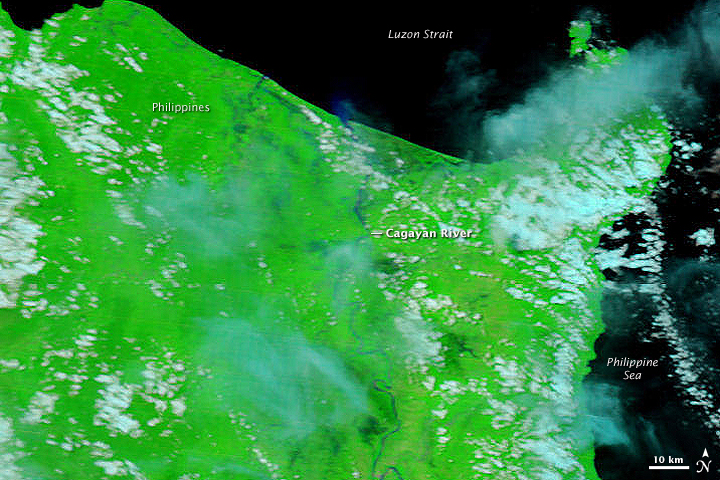 Though Typhoon Molave was only a tropical storm when it moved across the northern tip of Luzon, the largest of the Philippine Islands, on July 17 and July 18, 2009, its drenching rains caused widespread flooding. By July 20, the clouds had cleared enough to give the Moderate Resolution Imaging Spectroradiometer (MODIS) on NASA’s Terra satellite this view of the flooded island. The lower image, from July 15, 2009, shows the Cagayan River system in northern Luzon before the storm came ashore.

Both images contain a mixture of infrared light and visible light to increase the contrast between water and land. In this type of image, water is black. Sediment-laden water tends to be dark blue. The lush, plant-covered land of the tropical island is bright green, while clouds are pale blue and white.

In the wake of the storm, dark pools of water mark the land along the length of the Cagayan River and its tributaries. The flooding is most pronounced near the shore. Another sign of flooding is the plume of sediment that flows from the mouth of the Cagayan River. Floods sweep soil off the land and carry it into rivers and the ocean. The river plume contains more sediment on July 20 than it did on July 15.

According to the AFP news service, Typhoon Molave caused at least three deaths in the Philippines. Much of the damage came from widespread flooding throughout Luzon. About 95,000 people were evacuated from their homes outside Manila in southern Luzon as a result of flooding, reported the AFP news.