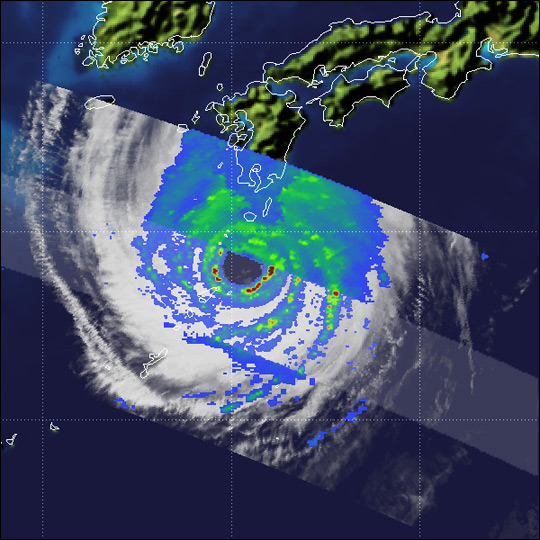 Typoon Nabi, once a powerful super typhoon, made landfall on Japan’s main southern island of Kyushu with sustained winds reported at 126 kilometers per hour (78 miles per hour). Nabi, which means “butterfly” in Korean, continued on over the southwestern tip of Honshu, triggering mudslides and flooding along the way, before heading out into the Sea of Japan. The storm left 17 dead and 9 missing in Japan, many as a result of mudslides. Four people were also reported missing in Korea.

The image shows the horizontal distribution of rain intensity within Nabi as observed by the Tropical Rainfall Measuring Mission (TRMM) satellite. Rain rates in the center of the swath are from the TRMM Precipitation Radar (PR), while those in the outer portion are from the TRMM Microwave Imager (TMI). The rain rates are overlaid on infrared (IR) data from the TRMM Visible Infrared Scanner (VIRS). The image shows Nabi at 08:29 UTC on September 5 as the large eye of the storm is bearing down on southern Japan. This dramatic image from TRMM reveals some important clues about the storm. The eye is very large but still closed with no rain visible in the broad center. The storm is relatively strong but in the process of slowly spinning down. The large eye indicates that the wind field has spread out, something that can occur in the later stages of strong tropical cyclones, making it unlikely that the storm can reintensify. At the time of the image, Nabi was a Category 3 typhoon with sustained winds estimated at 200 km/hr (125 mph). Nabi would continue to weaken as it approached the coastline.

The TRMM satellite has followed Nabi’s progress across the West Pacific. TRMM was launched in November 1997 to estimate rainfall over the global tropics and has proven itself to be a valuable platform for monitoring tropical cyclones, especially over remote parts of the open ocean. With its array of active and passive sensors, TRMM can look into the very heart of these storms. These two images of Nabi were taken by TRMM and capture the storm during its weakening stage.