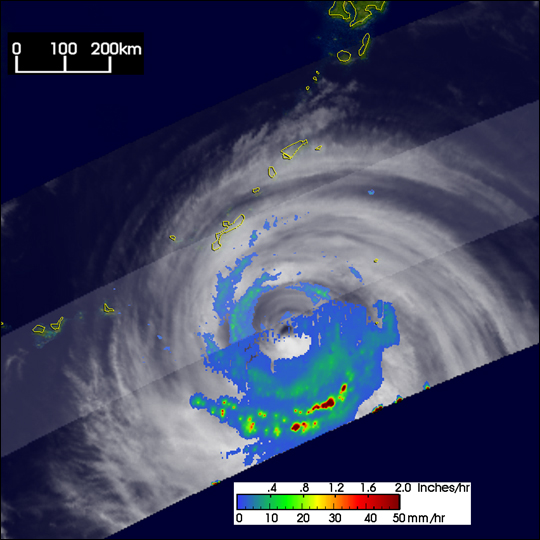 At one time Dianmu was a very powerful super typhoon packing winds of 155 knots (178 mph) over the central Philippine Sea back on the 16th and 17th of June 2004. As forecast, Dianmu weakened significantly as as it approached the main islands of Japan. Dianmu made landfall near the city of Muroto on the island of Shikoku in southern Japan early on the morning of the 21st of June 2004 (local time) as a minimal typhoon. The center of Dianmu passed over the center of the main Japanese island of Honshu before emerging into the Sea of Japan. The system continued to weaken and rapidly accelerate northward crossing over the northern Japanese island of Hokkaido before heading out into the north Pacific. The storm was responsible for 3 deaths and 3 missing in Japan.

The Tropical Rainfall Measuring Mission (TRMM) satellite continued to monitor Dianmu as it approached Japan. The first image was taken at 11:08 UTC on 19 June 2004 and shows the horizontal distribution of rain intensity. Rain rates in the center swath are from the TRMM Precipitation Radar (PR), while rain rates in the outer swath are from the TRMM Microwave Imager (TMI). The rain rates are overlaid on infrared (IR) data from the TRMM Visible Infrared Scanner (VIRS). At the time of this image, Dianmu was east of the central Ryukyu Islands and still a strong storm with winds estimated at 105 knots (121 mph) by the Joint Typhoon Warning Center soon after this image was taken. However, Dianmu was already in the process of rapidly weakening. TRMM shows Dianmu has a rather large eye with very little rain surrounding the center (blue areas represent light rain). Tropical cyclones are like large heat engines and require strong heating near their core to maintain their circulation. Rainfall provides a measure of that heating, and so without it, Dianmu can only continue to spin down and weaken.

The next image was taken at 15:07 UTC on the 20th and shows the storm has become less organized and weaker as it nears Japan with almost no evidence of an eye visible in the rain field. A broad area of light to moderate rain (blue and green areas) wraps around the eastern and northern part of the storm. At this time, the maximum sustained winds were down to 70 knots (81 mph).

The TRMM-based, near-real time Multi- satellite Precipitation Analysis (MPA) at the NASA Goddard Space Flight Center provides quantitative rainfall estimates over the global tropics. The final image shows MPA rainfall totals for the period 18-22 June 2004. Dianmu's track is marked by cyclone symbols at the 00:00 UTC times and crosses every 6 hours in between. The heaviest rainfall totals associated with Dianmu are on the order of 10 inches (red areas) and occur near where the storm made its initial landfall in southern Japan. Amounts from Dianmu are not excessive as the storm was moving rather quickly. The area of heavy rain that extends from the Korean peninsula across the Sea of Japan and merges with the rain from Dianmu over northern Honshu is associated with a seasonal frontal system and is not directly due to the typhoon.