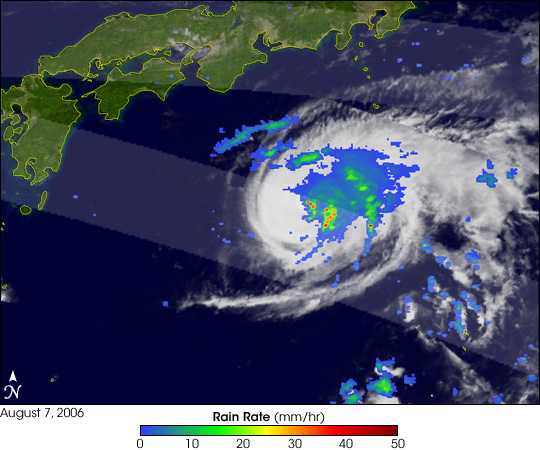 Typhoon Maria formed on August 5, building to tropical storm strength and earning a name during the next day. By early August 7, the storm became powerful enough to be upgraded again to the status of typhoon (the term for tropical cyclones in the western Pacific). Maria had reached Category 1 strength on the Saffir-Simpson scale as it approached the island of Honshu in Japan, but it was expected to weaken back to tropical-storm status before making landfall.

This image was made from data acquired by the Tropical Rainfall Measuring Mission satellite (TRMM) at 1:32 p.m. local time (05:32 UTC) on August 7, 2006, as Maria was heading towards Honshu. The image shows the rain intensity within Typhoon Maria. Rain rates in the center swath are from the TRMM Precipitation Radar, and rain rates in the outer swath are from the TRMM Microwave Imager. The rain rates are overlaid on infrared data from the TRMM Visible Infrared Scanner. The rain field was fairly compact and shows patches of intense rain (red) along the eyewall. At the time of this image, Maria had just reached typhoon status, with maximum sustained winds reported at 120 kilometers per hour (75 miles per hour) by the Joint Typhoon Warning Center.

The Tropical Rainfall Measuring Mission (TRMM) satellite was placed into service in November of 1997. From its low-earth orbit, TRMM has been providing valuable images and information on storm systems around the tropics using a combination of passive microwave and active radar sensors, including the first precipitation radar in space. TRMM is a joint mission between NASA and the Japanese space agency, JAXA.