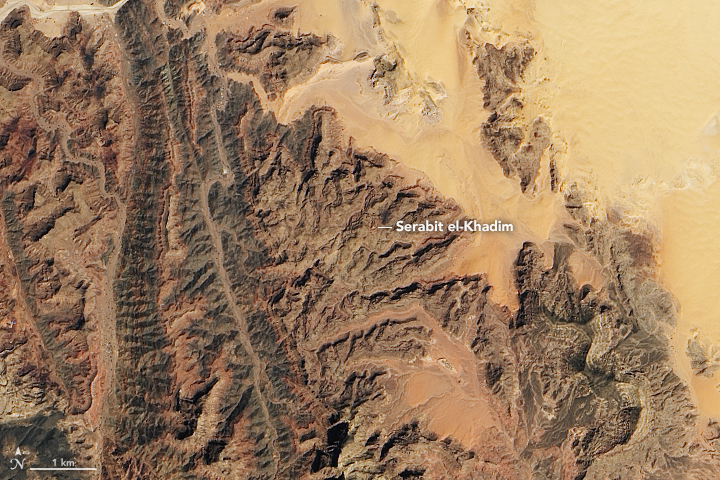 Humans have inhabited Egypt’s Sinai Peninsula since prehistoric times. As a land bridge between Asia and Africa, the Sinai has provided a path to countless travelers, conquerors, and settlers over the centuries. The southwestern region still has traces of some of the peninsula’s earliest inhabitants, from fragments of an ancient alphabet to remnants of turquoise mines.

The images above and below show southwest Sinai on March 11, 2021, as captured by the Operational Land Imager (OLI) on Landsat 8. Mountains dominate the region, making it difficult terrain to traverse. The wider image below shows the intersection of the mountains and El Ramla, the largest sand desert in the southern part of the peninsula.

The Sinai Peninsula has a dry desert climate, yet is also one of the colder provinces of Egypt due to its topography and relatively high elevation. Not many animals live in the area, but species of ibex, gazelles, wildcats, jackals, and sand foxes have been spotted there. Shrubs grow on steep slopes in the south, while succulents and salt-tolerant plants are found on coastal plains. The mountains of the Sinai have long been a destination for human hermits and mystics. Today, people make a living on the peninsula through the petroleum industry, agriculture, mining, fishing, and tourism. 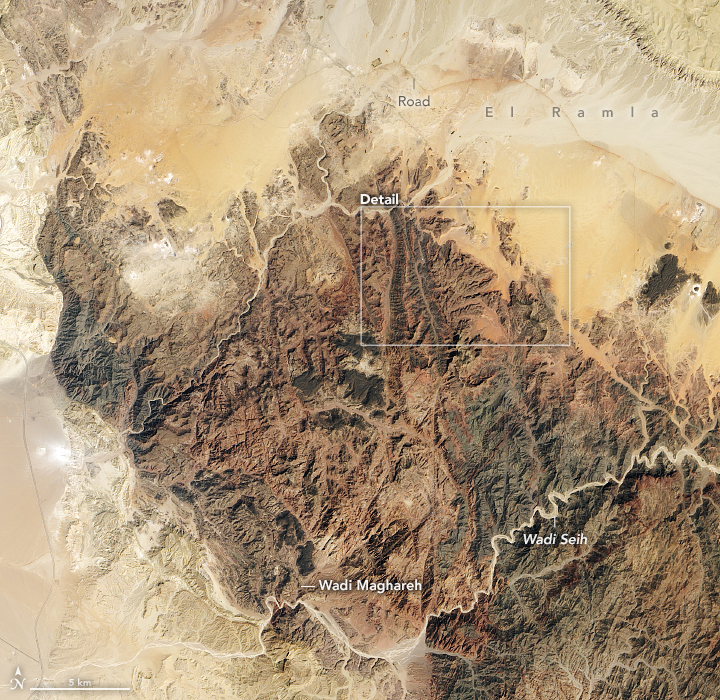 Archeologists estimate the earliest inhabitants in the southwestern Sinai were miners who excavated copper and turquoise deposits around 3,500 B.C.E. Two popular mining locations were Serabit el-Khadim and Wadi Maghareh (also known as the “Valley of Caves”). In many cases, the miners were slaves captured by Egyptians in war. They mined turquoise by hollowing out portions of the mountains, and then transported the mineral to the Egyptian mainland. The turquoise was used for jewelry and color pigments. Ancient Egyptians called the Sinai Mafkat, meaning “Country of Turquoise.”

Serabit el-Khadim is well-known today for its ancient ruins. Excavators have found scattered relics of a temple, including a red sandstone sphinx. Dedicated to the goddess Hathor, the temple is one of the few known monuments to a pharaoh in the Sinai.

The temple ruins also contain inscriptions believed to be precursors to an alphabet. The scripts were hieroglyphic signs—symbols were used to represent sounds. For example, linguists determined an inscription on the sphinx read “mahbalt,” meaning “beloved of the Lady.” An ox-head character is thought to be a forerunner of the letter a in the Latin alphabet. The script may also have been used to write the names of miners and keep track of their labors. There are also multiple engravings near the temple, including drawings of ships carrying turquoise.

The mountains in the southwestern Sinai Peninsula hold ancient relics of temples and turquoise mining. 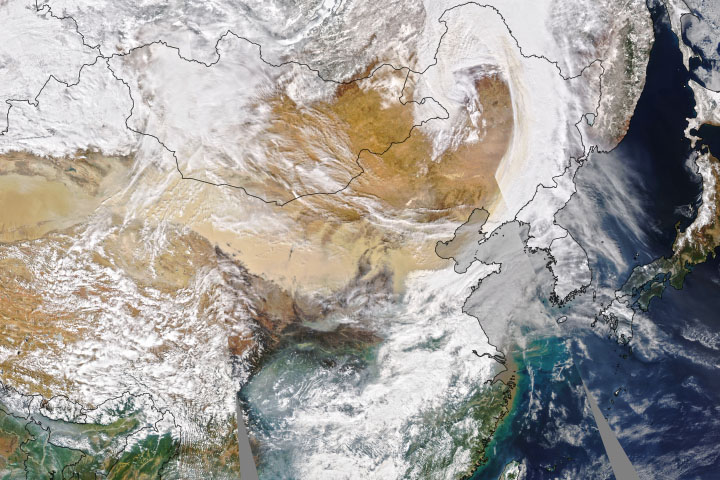 Southwestern Ireland as seen from the International Space Station

This broad view from the International Space Station shows the relationship between valleys, mountains, and the major towns. Near Killarney are ancient oak and yew forests.