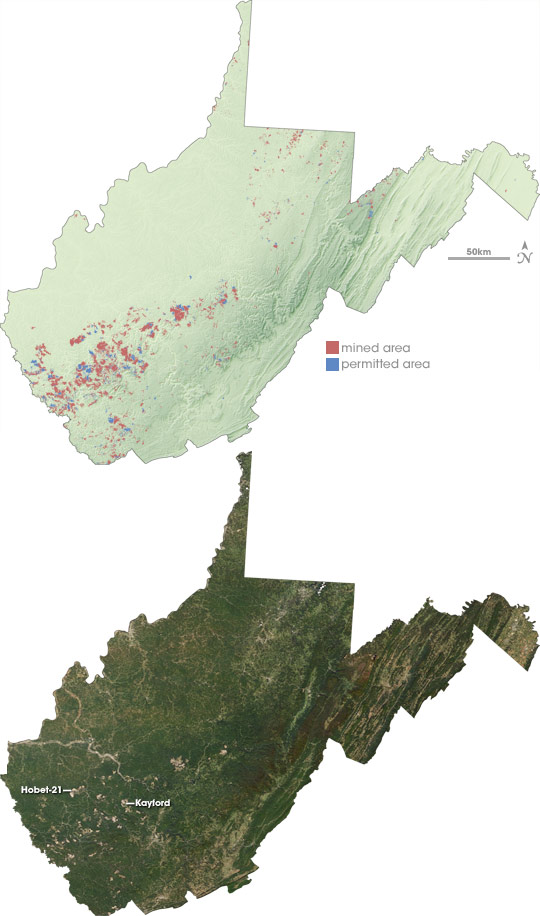 This map shows areas where active mining was occurring (light red) along with areas that had been permitted but not yet mined (blue), as of September 2007. At that time, some of the state’s largest mines were the Hobet-21 Mine and the Kayford Mine, each of which was more than 10,000 acres. Each of those mines and dozens of others create noticeable bald spots in the forested landscape in the photo-like image from the Moderate Resolution Imaging Spectroradiometer (MODIS) on NASA’s Terra satellite that appears below the map. The image was captured on September 29, 2007.

Mountaintop removal mining dramatically changes the topography across thousands of acres. The map shows how the sharp ridge lines of the state’s higher mountains, which run down the eastern side of the state, give way to a rugged plateau, crisscrossed by steep river and stream valleys to the southwest. Mountaintop removal mining alters this topography by reducing the elevation of the ridge lines, flattening out the steep slopes, and also by filling in hollows and stream beds with the excess rock and dirt that once topped the mountains.

To learn more about mountaintop removal mining in Appalachia and its effect on communities and natural resources, please read the Earth Observatory feature article Coal Controversy in Appalachia.