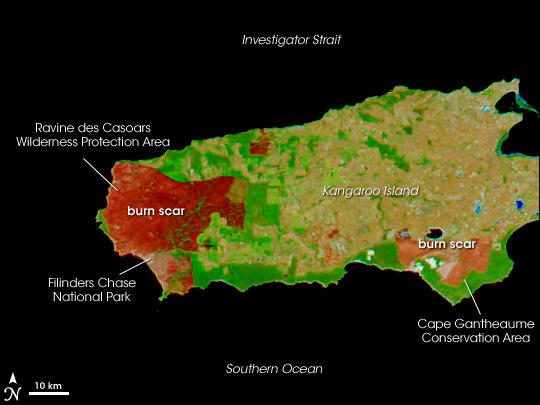 By late December 2007, parts of South Australia’s Kangaroo Island were left in cinders, thanks to wildfires earlier that month. Fires were already raging on December 8, and continued burning for several days. The hardest-hit areas included Flinders Chase National Park and Ravine des Casoars Wilderness Protection Area in the west, and Cape Gantheaume Conservation Park in the southeast.

This is a false-color image acquired by the Moderate Resolution Imaging Spectroradiometer (MODIS) on NASA’s Aqua satellite on December 26, 2007. The color combination used in this image is especially useful in distinguishing burn scars (red) from vegetation, even sparse vegetation (green), and bare soil or rock (sandy pink). Red scars mar the island in the scorched remains of its two largest parks.

The wildfire in Cape Gantheaume Conservation Park was controlled by December 12, according to news reports, while the file in Flinders Chase National Park continued to burn. The difference in the fires’ behavior appears discernible in the burn scars. While the burn scar in the west is large and intensely red, the southern burn scar is a paler shade of red and covers a smaller area. The burn scar in the south does not reach the coastline; green vegetation separates the burn scar from the ocean water, which appears black in this picture. The western burn scar, however, extends all the way to the ocean in most places, leaving just a diminutive patch of green along the coastline.

Split into two parts, Flinders Chase National Park essentially bookends the Ravine des Casoars Wilderness Protection Area, both of them occupying much of the western portion of Kangaroo Island and including a variety of landscapes. The smaller Cape Gantheaume Conservation Park consists primarily of wetland habitat.

You can download a 250-meter-resolution KMZ file of Kangaroo Island’s burn scars suitable for use with Google Earth.