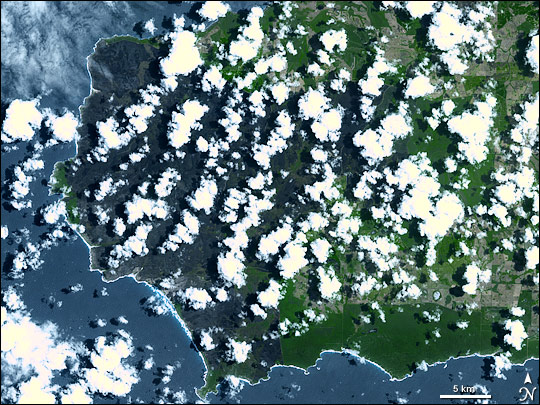 After fires broke out on South Australia’s Kangaroo Island earlier in the month, burn scars lingered in mid-December 2007. The Advanced Spaceborne Thermal Emission and Reflection Radiometer (ASTER) on NASA’s Terra satellite took this picture of the western edge of the island on December 20, 2007. Numerous clouds hover overhead but through the clouds, the landscape shows signs of trauma.

In this simulated true-color image, white indicates clouds, blue indicates water, green indicates vegetation, gray-beige indicates bare ground, and charcoal gray indicates the burn scar left behind in Flinders Chase National Park and Ravine des Casoars Wilderness Protection Area. The burn scar is most obvious in the upper left portion of the image, where the charcoal gray color extends all the way to the white line of coastal beach. Midway down the western coastline, a small piece of land juts out from the island, and this one area retains some vegetation, appearing dark green. Except for this area, the burn scar extends to the southwestern part of the island. The billowing gray-blue puffs in the upper left corner of the image—thinner and less distinct in shape than the nearby clouds—may be smoke released by the smoldering remains of the wildfire.

Another NASA sensor acquired an additional image of this burn scar, as well as the burn scar in Cape Gantheaume Conservation Park (not pictured in this image) on December 26, 2007.

Several days after it started, the Freeway Fire left a sprawling burn scar on the California landscape.