Winter Along the Niagara River 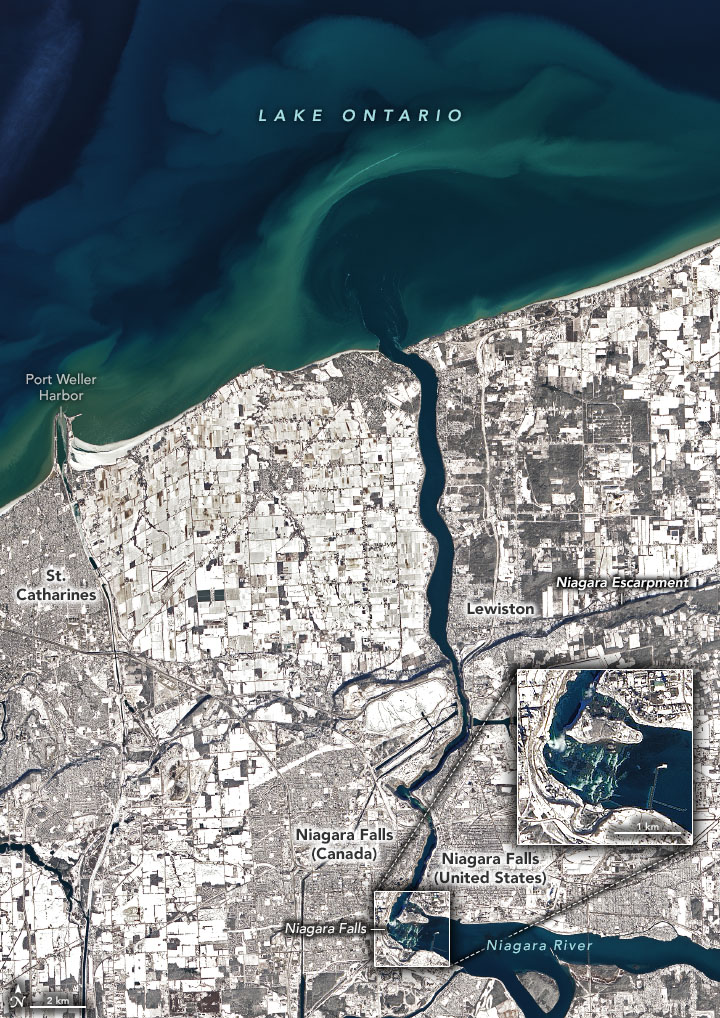 The summer and its shoulder seasons have been called the best time of year to visit Niagara Falls—the famous group of waterfalls spanning the U.S.-Canada border in western New York and southern Ontario. But the falls and surrounding region are also earning recognition for their beauty during the winter months.

This image, acquired on February 4, 2021, with the Operational Land Imager (OLI) on Landsat 8, shows the snow-covered landscape around the Niagara River in mid-winter. Some of the features pictured here are seasonal phenomena; others have been in the works for millions of years.

The Niagara River drains all of the upper Great Lakes (Superior, Huron, Michigan, and Erie), making it one of the largest rivers in North America by volume. This image shows the portion of the river north of Lake Erie, where it flows northward over the Niagara Escarpment, plummeting over the falls, and passing through the Niagara Gorge along the way toward Lake Ontario.

Note the striking contrast between the snow-covered ground and the dark, unfrozen river. The abundant water in the Niagara River flows extremely fast, preventing much ice from forming on this part of the river except in the coldest years. Upstream (south of this image), steel booms are installed each winter to prevent Lake Erie ice from entering the river and potentially damaging the water intake areas of hydropower plants. Relatively warm weather in December and January has kept Niagara River ice to a minimum this year. The warmth also contributed to record low ice cover across all of the Great Lakes for the time of year.

The river is substantially lower in elevation than the surrounding landscape—the result of 14,000 years of water cutting down into the rock at the same time that the land was lifting up after the last ice age. For this reason, the river downstream of the escarpment does not migrate laterally or flood its banks the same way that other rivers might.

Deforestation and agriculture took off in the 18th century, followed by urbanization that has accelerated in the past 100 years. In this image, roads and major cities appear dark gray. Agricultural lands—including plenty of vineyards positioned to take advantage of the lakeshore’s moderated climate—remain mostly snow covered.

Also note the thin, dark-green line running diagonally across the land through Lewiston. This is the location of the Niagara escarpment—a cliff face formed by millions of years of erosion. It is extremely steep and lacks snow cover in this image, making the evergreen trees (mostly eastern white cedar) stand out. The Niagara Falls once flowed over this part of the escarpment, but erosion from the force of the water caused the falls to retreat about 7 miles (11 kilometers) upstream to their current position.

The fast-flowing water eventually flows into Lake Ontario, where it disrupts the currents flowing eastward along the shoreline. The river water is low in suspended sediments and appears as a dark plume where it mixes with the sediment-rich (green) water of the lake. The lake’s west-to-east longshore current is also evident in the patch of frozen water east of Port Weller harbor. Water on the east side of the harbor’s breakwater structure stays calm, allowing it to freeze easily.

The fast-flowing river cuts through a snowy landscape as it flows toward Lake Ontario. 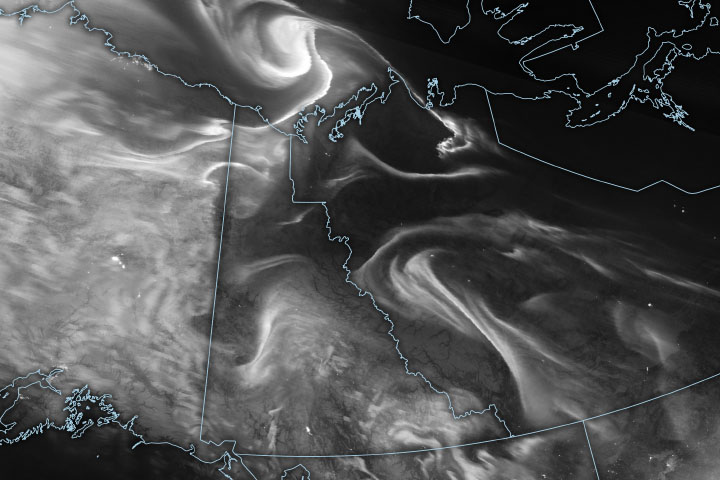