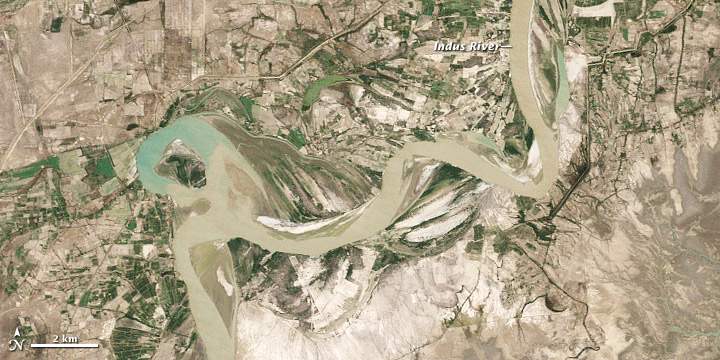 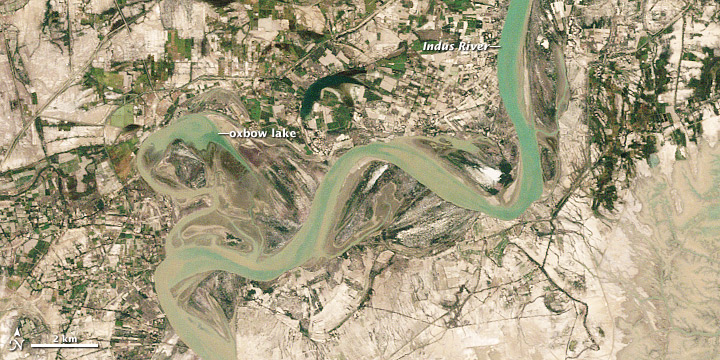 The Indus River originates in Tibet and follows a circuitous route southward through the Himalaya Mountains to the Arabian Sea, emptying into the ocean southeast of the coastal city of Karachi. As it approaches the sea, the river meanders over the coastal plain. Like other rivers that wind across coastal plains, the course of the lower Indus River shifts frequently.

This pair of images captured by the NASA/USGS Landsat 5 satellite illustrates one of the most common ways the river changes course. The top image is from April 27, 1992, and the bottom image is from October 19, 2009. In 1992, a loop extends northward from the river (image upper left). In 2009, the river has changed course, not curving as far north as it did in 1992. And in 2009, the loop that once extended from the river has been reduced to a semicircular water body connected to the river only by a narrow channel.

These images capture the development of an oxbow lake. When water flows around a river bend, it deposits sediment on one bank while cutting away at the ground on the opposite bank. When a river forms a loop on flat terrain, undercutting occurring on the riverbanks closest to each other can eventually connect the banks, giving the river a shortcut. Isolated from the newly shortened river, the older, longer route eventually forms an arc-shaped lake.

An oxbow lake may survive as a water body for some time, especially if groundwater seeps into it. Alternately, the oxbow lake may dry our or fill with sediment. Wetlands often develop in the meander scars of dried-up oxbow lakes. Much of the land around the Indus River is wetland, and the salt flats southeast of the Indus River are part of the Rann of Kachchh.

East-northeast of the oxbow lake forming in these images is another lake that probably developed in similar fashion. Other differences between the images are related to human activity. Southeast of the river, a network of lines, perhaps roads or irrigation ditches, intensified between 1992 and 2009. West-southwest of the developing oxbow lake, agricultural fields appear to have multiplied, but the differences may also be due to the fact that images were captured in different seasons.

NASA images by Robert Simmon, based on Landsat 5 data. Caption by Michon Scott.