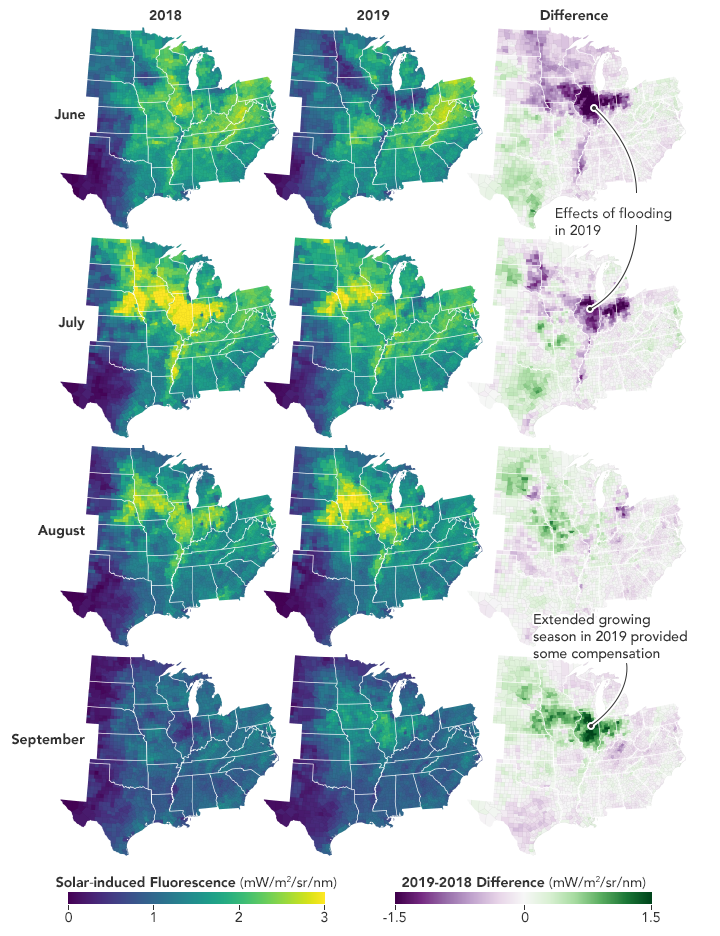 It might sound like science fiction, but the U.S. Midwest literally glows during the growing season. The glow—emitted by healthy, productive plants all over the world—is far too dim to be seen with the naked eye. In recent years, however, scientists have worked on detecting this signal using satellites. And they’re using it to make some remarkable observations.

When a plant is performing photosynthesis—absorbing sunlight to convert carbon dioxide and water into food—its chlorophyll will “leak” or emit some photons during the process. This faint glow is called “solar induced fluorescence,” or SIF. The glow is directly related to the biochemical processes happening inside the plant, so scientists can use it as a proxy for plant productivity. The higher the fluorescence from a plant, the more carbon dioxide it is taking from the atmosphere to fuel its growth.

Because fluorescence offers a direct view into the photosynthetic machinery of plants, scientists can use it to detect nuances in the growing season that might be missed by other methods that rely on changes in vegetation color, or “greenness.” Detecting the faint signal of fluorescence with satellites has been a challenge, but scientists have made fast progress.

“The first global maps of fluorescence were really coarse, yet the data allowed us to make some interesting discoveries,” said Philipp Köhler, a researcher at Caltech who studies SIF.

In 2014, for example, scientists showed that the U.S. Midwest is one of the most productive growing regions in the world, out-glowing even the Amazon rainforest at times. Then in 2016, they discovered that the growing season of forests in northern latitudes is often weeks longer than previously thought. Most of that pioneering work with SIF was done with satellites and instrument—such as JAXA’s GOSAT, ESA’s GOME-2 and SCIAMACHY, and NASA’s OCO-2—not specifically designed to measure SIF.

More recently, the scientists at Caltech have retrieved high-resolution fluorescence data from the Tropospheric Monitoring Instrument (TROPOMI) on ESA’s Sentinel-5P satellite to investigate cropland changes in near-real-time. In research published in March 2020, Yi Yin and colleagues estimated that cropland productivity in the Midwest declined by 15 percent in 2019 (from 2018 levels) after record-wet conditions shifted the timing of the growing season.

The maps above show how the solar induced fluorescence signal evolved across the Midwest during a typical growing season (2018) and during the record precipitation and flood conditions of 2019. The third column shows the difference between the two years. Notice that fluorescence in 2018 peaked strongly in July and then declined, which is the typical progression of productivity across Midwest croplands.

The 2019 maps tell a different story. By the end of April 2019, the U.S. had experienced its wettest 12-month period on record. The Midwest was hit particularly hard, with saturated soils and widespread flooding across the Mississippi and Missouri river watersheds. The conditions caused farmers to delay planting by a few weeks in most states and up to five weeks in Illinois. As a result, fluorescence that year was weaker than usual in June and July, when croplands were much less productive. August and September showed higher-than-usual fluorescence, indicating an extended growing season. But the 2019 season as a whole was still not productive as 2018. 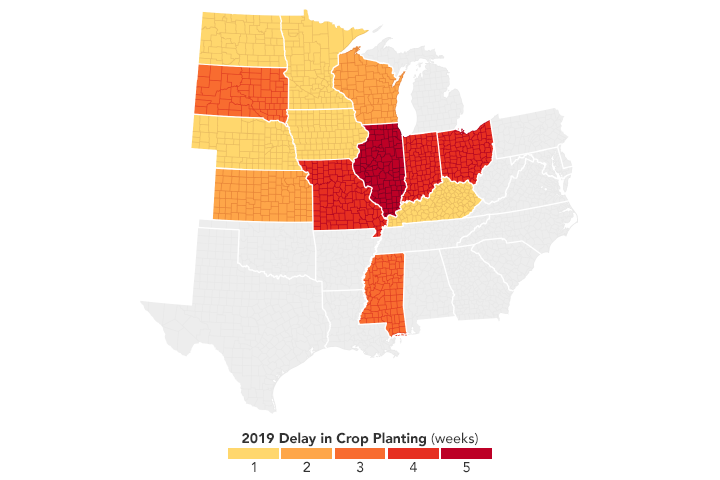 “Extreme climate events such as flood, drought, and heatwave are expected to increase with global warming, and have a direct impact on crop productivity and food security,” said Yin, a researcher at Caltech and author of the NASA-funded study. For instance, the agricultural productivity of the U.S. Midwest is being threatened by climate change, as variations in snow and rainfall over the past three decades have reduced farmers’ flexibility in timing their springtime planting.

Cropland productivity also has implications beyond food security; it also influences the amount of carbon dioxide stored in the atmosphere and the land. Around the planet, carbon is constantly exchanged between the land, atmosphere, and oceans as part of the carbon cycle. Plants, trees, and grasses—including farmlands—are an important part of the cycle, converting carbon dioxide into food during photosynthesis. When crops exhibit lower fluorescence values, less photosynthesis is occurring. In turn, those crops are taking up less carbon dioxide.

Based on the TROPOMI SIF data, the researchers estimated that the carbon uptake by Midwest crops in June and July 2019 was reduced by 100 million metric tons compared to the previous year due to the floods and late planting. Measurements from NASA’s OCO-2 satellite and from aircraft confirmed that carbon dioxide levels in the atmosphere over the Midwest were higher in 2019 due to the reduced capture of carbon as simulated with an atmospheric transport model.

“The reduction in regional carbon uptake could contribute to a faster CO2 increase, forming a positive feedback to climate warming,” Yin said. “A critical step in our efforts to address climate warming is understanding the structure and quantities of anthropogenic CO2 emissions. The magnitude of the seasonal reduction shown in this study highlights the importance of monitoring carbon cycle anomalies in both natural and agricultural ecosystems to get a full picture.”

As scientists detect plant fluorescence in better detail, they inch closer to helping farmers respond to extreme weather and close in on understanding how carbon cycles through ecosystems.