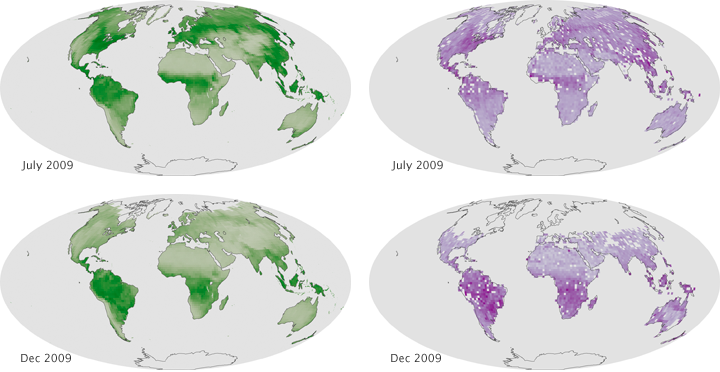 Scientists who study plants and trees from space have long relied on satellite-derived measures of “greenness”—that is, observations of the amount of sunlight reflected by vegetation. Greenness increases with seasonal growth and decreases with droughts, frosts, seasons, or other events that cause leaves to die and change color.

Now scientists have tested a new method for monitoring the health of vegetation by measuring emissions that the human eye cannot detect. Researchers at NASA’s Goddard Space Flight Center have produced the first global maps of land-plant fluorescence, a reddish glow that leaves emit as a byproduct of photosynthesis. Researchers had previously mapped such emissions from ocean phytoplankton.

The maps above on the left depict the Enhanced Vegetation Index (EVI) for July and December 2009, a measure of greenness based on data from the Moderate Resolution Imaging Spectroradiometer (MODIS) on the Aqua satellite. Scientists also rely on the Normalized Difference Vegetation Index (not shown) to observe vegetation.

The maps on the right show the new measurement of chlorophyll fluorescence for the same months, based on data from a spectrometer on Japan's Greenhouse Gases Observing Satellite (GOSAT). The new maps are significant as a "proof of concept" that fluorescence can be measured from space.

When sunlight strikes a leaf, disc-like structures called chloroplasts absorb most of the light and convert it into carbohydrates through photosynthesis. Chloroplasts re-emit about two percent of incoming light at longer, redder wavelengths. That is the light that the new method detects.

While EVI and NDVI are well-established and reliable measurements, there can be a lag between what happens on the ground and what satellites can detect. It can take days—even weeks—before changes in greenness are apparent. The chlorophyll fluorescence method offers a more direct view into the photosynthetic machinery of plants and might provide an opportunity to detect stress sooner.

“With chlorophyll fluorescence, we should be able to tell immediately if plants are under environmental stress—before outward signs of browning or yellowing become visible,” said Elizabeth Middleton, a NASA biologist who helped create the maps.

In the future, the Goddard team expects fluorescence measurements will complement EVI and NDVI, helping farmers and aid workers to respond to extreme weather events and potential crop failures and famines sooner. Fluorescence could also lead to breakthroughs in scientists’ understanding of how carbon cycles through ecosystems.

Scientists have tested a new method for monitoring the health of vegetation by measuring fluorescent light emissions that the human eye cannot detect.