A Falcon over Ajim 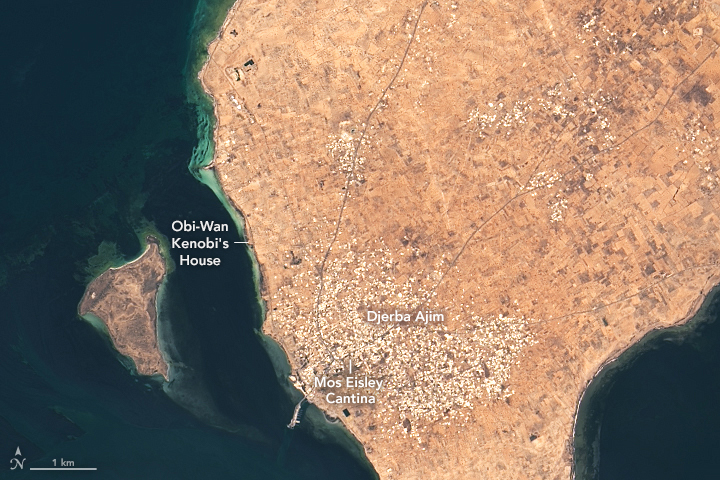 Some of the most iconic scenes of the first Star Wars movie were set in the Mos Eisley Cantina, a dimly lit tavern on the desert planet of Tatooine. It was there that Luke Skywalker and Obi-Wan Kenobi first met Han Solo and Chewbacca, confronted the gangster Greedo, and made a dramatic escape after a firefight with Stormtroopers.

Their escape vehicle, the Millennium Falcon, has since inspired the name of a series of real-world rockets. The SpaceX Falcon 9 is scheduled to launch two astronauts from NASA’s Kennedy Space Center to the International Space Station on May 27, 2020. The Crew Demo-2 Mission will mark the first launch of NASA astronauts from American soil since 2011.

In the movie, Mos Eisley was a dusty, bustling port city set on a desert plain. In the real world, parts of several key scenes from the spaceport were filmed in Ajim, a fishing town on the Tunisian island of Djerba. The island (also called Jerba) is situated in the Gulf of Gabes on the Mediterranean Sea. 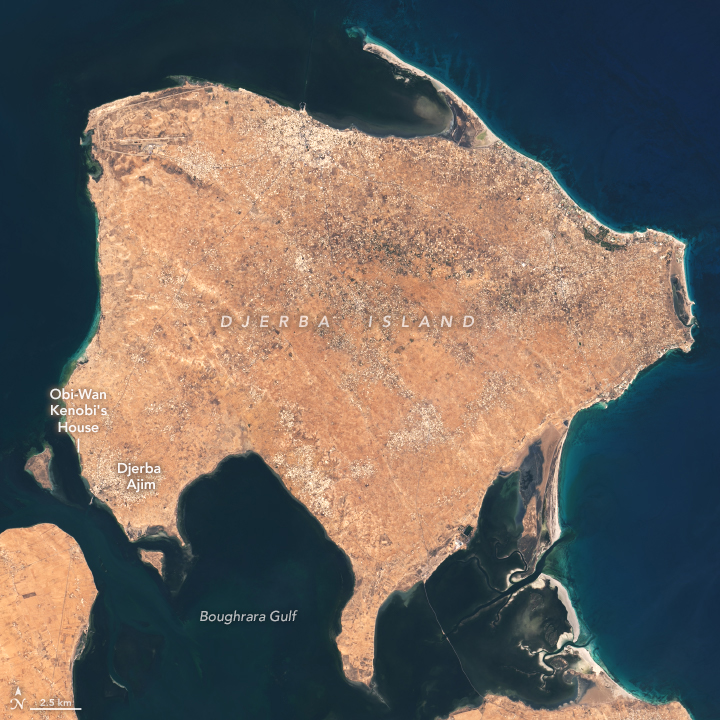 A domed building that was once a Berber bakery provided the exterior of the cantina. Though now crumbling, the building still stands in the southern part of the city near a ferry terminal. Apartments have sprung up around it, but tourists still come to see its exterior and find the skyline and cityscape that the Millennium Falcon rocketed through.

The Operational Land Imager (OLI) on Landsat 8 acquired these natural-color images of Ajim on May 4, 2020. While the resolution of the sensor (30 meters per pixel) is not enough to easily distinguish the cantina, it is located just south of where highways C116 and C209 meet.

On the northern outskirts of Ajim, there is another set from Star Wars—the desert abode of Obi-Wan. The scenes were actually filmed in an old mosque along the Mediterranean Sea, which still stands but has become a storage space for fishing equipment. If you look carefully at the large image, the structure is just barely visible.

Iconic scenes from the original Star Wars movie were filmed in a Tunisian fishing town.