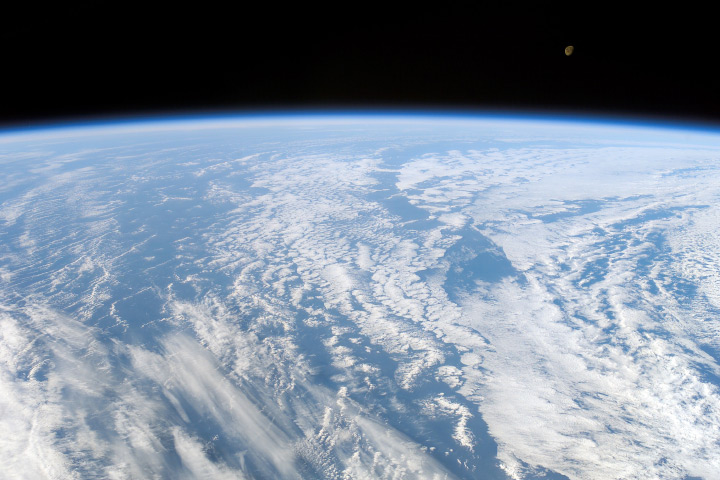 Ten years ago, the astronauts of space shuttle Columbia, flight STS-107 lost their lives in a tragic accident upon re-entering Earth’s atmosphere. On January 22, 2003, they captured this more benign view of the atmosphere and of the Moon. Looking west over the Atlantic Ocean, the crew glimpsed the many cloud formations that help make our Blue Marble beautiful and livable.

“These explorers, and their families, have our deepest respect,” NASA administrator and astronaut Charles Bolden wrote on February 1, 2013. “We work every day to honor and build on their legacy and create the best space program in the world—to infuse it with the life and vitality that they worked so hard to achieve.”

“Exploration will never be without risk, but we continue to work to ensure that when humans travel to space, nothing has been left undone to make them as safe as possible...We are in a new era of exploration, where the work and sacrifice of those who have gone before will help us once again launch American astronauts from American soil and send them farther into deep space than we have ever gone. ”

Astronaut photograph STS107-E-5311 was acquired on January 22, 2003, with a Kodak DCS760C camera using a 40 millimeter lens, and is provided by the Crew Earth Observations experiment and Image Science & Analysis Laboratory, Johnson Space Center. The image was taken by the STS-107 crew. It has been cropped and enhanced to improve contrast, and lens artifacts have been removed. The International Space Station Program supports the laboratory as part of the ISS National Lab to help astronauts take pictures of Earth that will be of the greatest value to scientists and the public, and to make those images freely available on the Internet. Additional images taken by astronauts and cosmonauts can be viewed at the NASA/JSC Gateway to Astronaut Photography of Earth. Caption by Mike Carlowicz.