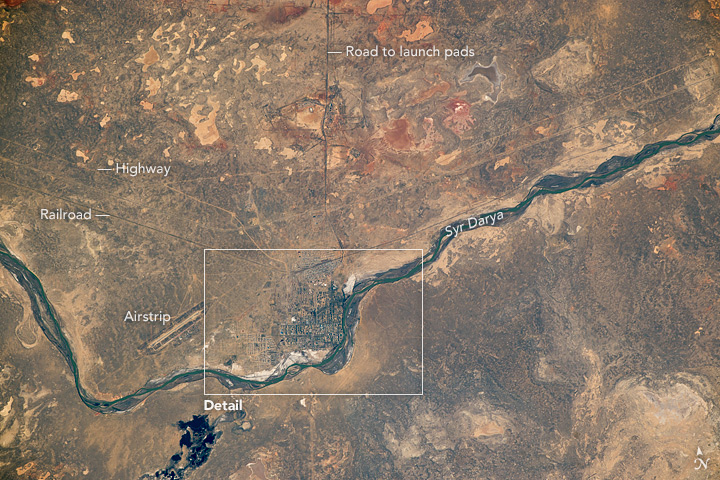 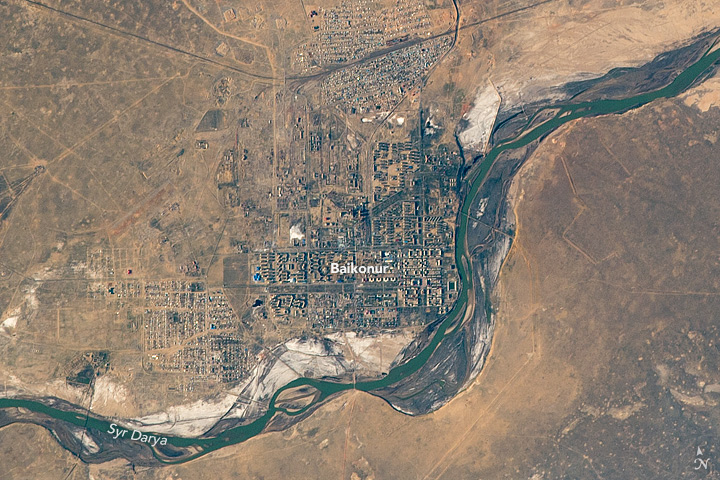 When flying over the semi-desert grasslands of Kazakhstan, crew members aboard the International Space Station (ISS) usually follow the long line of the Syr Darya (river) to find the spaceport from which they launch. Situated along a major bend in the river, the town of Baikonur is home to the Cosmodrome, the world’s “first and largest space launch facility.”

The straight road going north from Baikonur takes the astronauts and cosmonauts to the launching area (top margin of the image). The railroad that crosses the photo brings rocket parts to Baikonur from Russia. The highway between Orenburg, Russia, and Tashkent, Uzbekistan, follows a roughly parallel route. For scale, the airstrip is 3.4 kilometers (2.1 miles) long.

The dark areas at image lower left are wetlands that indicate the old bed of the Syr Darya—where the river used to flow in a more southerly course to the Aral Sea. The semi-desert landscape around Baikonur is a mix of dry lakes, sand dunes, and vegetation-free patches of dirt and bare rock.

The most recent crew members to pass through Baikonur on the way to the space station were Kate Rubins (USA), Anatoly Ivanishin (Russia), and Takuya Onishi (Japan). They arrived at ISS on July 11, 2016, for their months-long stay. At the end of their flight, the astronauts will land on these same plains in a capsule assisted by parachute.

Astronaut photograph ISS047-E-53582 was acquired on April 10, 2016, with a Nikon D4 digital camera using a 400 millimeter lens, and is provided by the ISS Crew Earth Observations Facility and the Earth Science and Remote Sensing Unit, Johnson Space Center. The image was taken by a member of the Expedition 47 crew. The image has been cropped and enhanced to improve contrast, and lens artifacts have been removed. The International Space Station Program supports the laboratory as part of the ISS National Lab to help astronauts take pictures of Earth that will be of the greatest value to scientists and the public, and to make those images freely available on the Internet. Additional images taken by astronauts and cosmonauts can be viewed at the NASA/JSC Gateway to Astronaut Photography of Earth. Caption by M. Justin Wilkinson, Texas State University, Jacobs Contract at NASA-JSC. 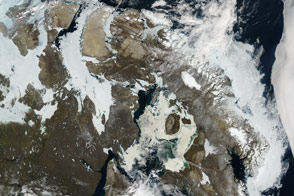 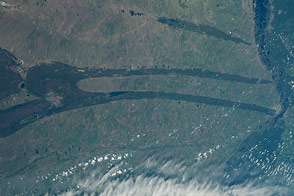 Strange spike patterns on the Siberian landscape caught the attention of astronauts on the ISS.