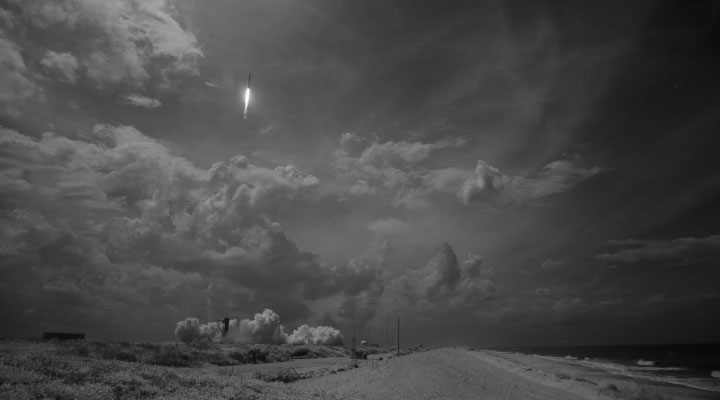 The SpaceX Crew Dragon spacecraft carrying NASA astronauts Robert Behnken and Douglas Hurley lifted off at 3:22 p.m. EDT on May 30, 2020, from Launch Complex 39A at NASA Kennedy Space Center in Florida. The spacecraft was launched atop a reusable SpaceX Falcon 9 rocket. The black and white infrared image above highlights the combustion powering the rocket as it soared above the Florida coast.

Behnken and Hurley named their spacecraft Endeavour as a tribute to the first space shuttle that both astronauts had flown aboard. Endeavour also flew the penultimate mission of the Space Shuttle Program, launching in May 2011 from the same pad.

Dragon Endeavour docked successfully with the ISS about nineteen hours after reaching orbit. It arrived at the station’s Harmony port while both were about 262 miles (422 kilometers) above the northern border of China and Mongolia. The photograph below shows the spacecraft approaching the space station with part of southwestern Turkey—including the coastal city of Demre—in the background. The third photo shows the spacecraft just before docking. 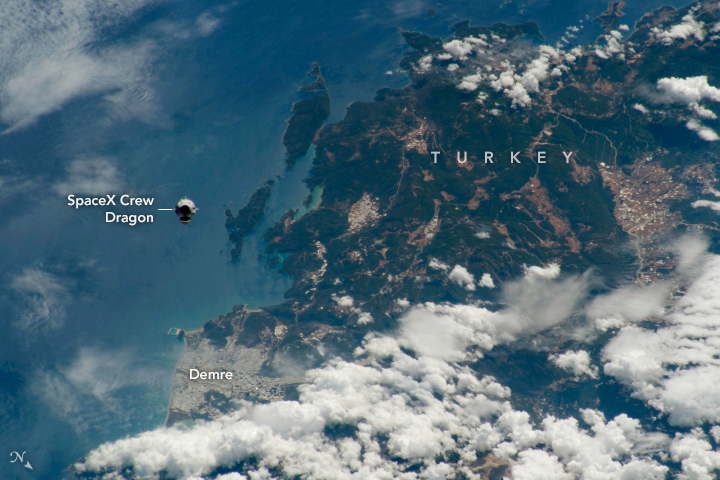 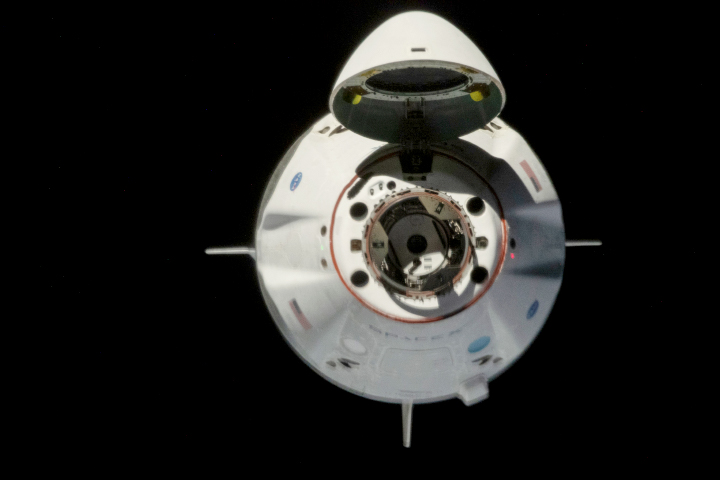 Known as NASA’s SpaceX Demo-2, the mission is a test flight to validate the SpaceX crew transportation system, including launch, in-orbit, docking, and landing operations. It was SpaceX’s second spaceflight test of its Crew Dragon, and its first test with astronauts aboard. The mission will pave the way for its certification for regular crew flights to ISS as part of NASA’s Commercial Crew Program.

“It’s difficult to put into words how proud I am of the people who got us here today,” said Kathy Lueders, NASA’s Commercial Crew Program manager. “When I think about all of the challenges overcome—from design and testing, to paper reviews, to working from home during a pandemic and balancing family demands with this critical mission —I am simply amazed at what the NASA and SpaceX teams have accomplished together.

NASA launch photograph by Joel Kowsky. Photographs ISS063-E-21578 and ISS063-E-20960 were acquired on May 31, 2020 by an External High Definition Camera on the International Space Station, with a Nikon D4 digital camera using an 600 millimeter lens. The image has been cropped and enhanced to improve contrast, and lens artifacts have been removed. Caption by Adam Voiland and Michael Carlowicz based on information from NASA press releases.